The number of federal government jobs in both the District and the wider D.C. region has declined on a year-over-year basis almost every month this year,
Listen now to WTOP News WTOP.com | Alexa | Google Home | WTOP App | 103.5 FM

WASHINGTON — The number of federal government jobs in both the District and the wider D.C. region has declined on a year-over-year basis almost every month this year, according to statistics kept by the District’s Office of the Chief Financial Officer.

In September, the office reported 195,100 federal government jobs in the District — 3,500 fewer than a year ago, and an annual decline of 1.8 percent.

The number of local government jobs in the region was up significantly from a year ago.

Aside from the broad employment category of professional, business and other services, health care and education are the largest area employers, accounting for 444,400 area jobs in September.

Leisure and hospitality posted the biggest annual growth, with 341,700 jobs — 12,200 more jobs than a year earlier and a job growth rate of 3.7 percent. Federal workers get Christmas Eve off 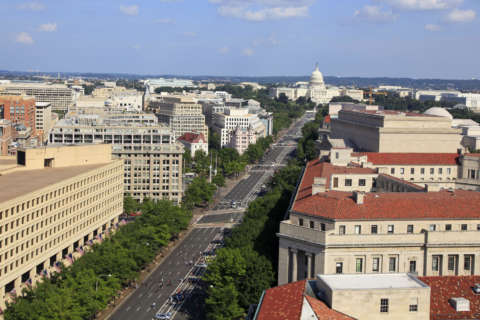 Exactly how many Washingtonians work for the federal government?