Another source of holiday stress? The decorations

Putting up the lights isn't as fun as it should be. Holiday decorating can be a source of stress, family friction and anxiety — and money is a part of it.
Listen now to WTOP News WTOP.com | Alexa | Google Home | WTOP App | 103.5 FM

WASHINGTON — Putting up the lights isn’t as fun as it should be. Holiday decorating can be a source of stress, family friction and anxiety — and money is a part of it.

A survey by UNITS Moving and Portable Storage found 42 percent of 500 respondents said holiday decorating is stressful because their partner wants to spend more money on decorations than they do,

And why would a storage company survey customers about holiday decorations? Because, it turns out, storing them is another source of stress.

“Holiday decorations are so important to families. They are passed down. They are heirlooms. They don’t throw anything away because it is family tradition,” Eric Miller, at a Northern Virginia UNITS franchise, told WTOP.

In the company’s survey, one-third of respondents said they have too many holiday decorations, and 42 percent said they don’t have enough room to store them all.

Putting up the lights can also be less about holiday spirit than it is about keeping up with the neighbors.

Almost half of respondents in the survey said decorating is more about competition among neighbors than holiday spirit. And 21 percent said there is a must-see house in the neighborhood that attracts unwanted both attention and traffic.

“You can drive down certain streets of every community, and it is one family and one home that is trying to outdo the other,” Miller said.

Everybody’s biggest gripe about holiday decorations? Those strings of lights that mysteriously tangle themselves between seasons. Nearly half of those surveyed say it takes an hour or longer to untangle lights.

UNITS has some holiday decoration storing hacks on its website, such as wrapping strings of lights around a piece of cardboard to keep them tangle-free. 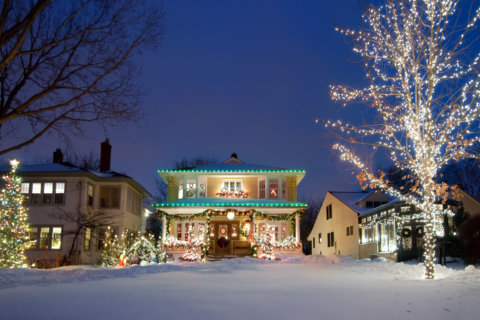 Can your HOA regulate your holiday decor?