Big phase 2 unveiled for The Yards in DC 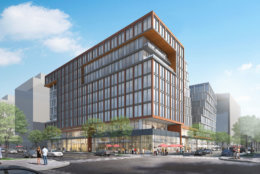 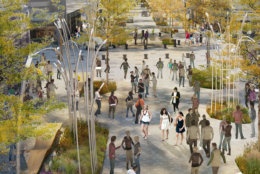 WASHINGTON — Developer Forest City Washington has taken the wraps off its plans for phase two expansion of The Yards and will break ground in 2019. The entire phase two addition will be completed in 2030.

Phase two includes an additional 3 million square feet of mixed-use development on an undeveloped 18 acres of land on the western side of The Yards, between 1st Street Southeast and New Jersey Avenue.

The current The Yards development along the Anacostia is at the center of the Capital Riverfront Business Improvement District.

Phase two includes an additional 1,200 residential units, 1. 5 million square feet of Class A office space, and another 150,000 square feet of retail and dining.

“With phase two — which when complete will nearly triple what has already been delivered — The Yards will offer even more incredible office, dining and residential properties in the region, located just steps away from Nationals Park,” said Forest City Washington’s President, Deborah Ratner Salzberg.

Forest City said phase two will be organized around a vibrant pedestrian-friendly street. The six-block spine will begin at a new plaza at the intersection of New Jersey Avenue and M Street, Southeast and extend to the river at Diamond Teague Park.

When phase two is complete, The Yards will include 3,400 residential units, 400,000 square feet of retail, dining and services, 1.8 million square feet of office space and its waterfront park that’s spread across 25 buildings on 48 waterfront acres.