1 in 5 DC-area homeowners is ‘equity rich’

The nation’s most expensive housing markets are where there are the most equity rich homeowners, presumably because owners before the market crash have benefited from the huge run-up in prices in those markets. Find out how many homeowners in the D.C. area are equity-rich and how many are underwater.
Listen now to WTOP News WTOP.com | Alexa | Google Home | WTOP App | 103.5 FM

WASHINGTON — While there are still too many mortgaged homeowners in the Washington area who owe the bank more than for what they could sell their homes, there are more homeowners here who could sell and walk away with a sizable down payments for their next homes.

Real estate firm Attom Data Solutions said 22 percent of D.C.-area homeowners with mortgages are what it considers “equity rich,” meaning they could sell for at least 50 percent more than the current balance on their mortgages. That’s almost 296,000 mortgaged homeowners.

About 6.7 percent of mortgaged homeowners are still underwater, owing banks at least 25 percent more than for what they could sell. These are mostly buyers who bought at the pre-recession height of the market before the housing market crash.

Still, those aren’t bad numbers, and a testament to the D.C.-area housing market’s recovery.

Nationwide, Attom Data Solutions said at the end of the third quarter, 8.7 percent of all properties with mortgages were seriously underwater, down from 10.8 percent in the third quarter of 2016.

“Median home prices nationwide are up 9.4 percent so far in 2017, the fastest pace of appreciation through the first three quarters of a year since 2013.”

Ironically, the nation’s most expensive housing markets are where there are the most equity rich homeowners, presumably because owners before the market crash have benefited from the huge run-up in prices in those markets.

The highest share of equity rich property owners — 61 percent — are in San Jose, California, where the median home price now tops $1 million. San Francisco, Los Angeles and Honolulu also top the list for equity-rich owners, all among the most expensive housing markets in the country.

In Seattle, the number of seriously underwater owners is now an all-time low of just 3 percent, where the share of equity rich owners has more than doubled since 2013.

Not all markets have made big strides in recovery. 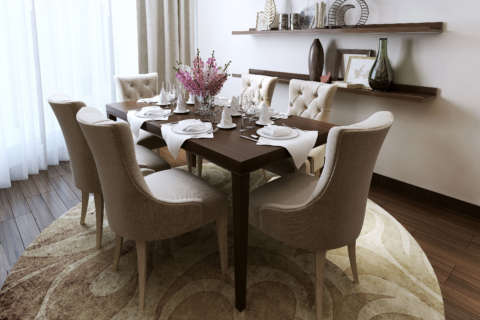 Dining rooms are still a thing. So are avocado green appliances