Glen Allen, Virginia-based telecom Straight Path Communications, was approached by AT&T earlier this month, and now says it has a competing offer that is superior. The company has seen its stock jump from $40 a share two weeks ago to $120 this week.
Listen now to WTOP News WTOP.com | Alexa | Google Home | WTOP App | 103.5 FM

WASHINGTON — Glen Allen, Virginia-based telecom Straight Path Communications has seen its stock jump from less than $40 a share on April 10 to $120 Tuesday, on offers to be acquired.

Straight Path, which holds FCC licenses for lucrative 5G spectrum, was approached by AT&T earlier this month, and now says it has a competing offer that is superior.

Straight Path now says it has received an unsolicited offer from a multinational telecommunications company, which it did not identify, for $1.8 billion. It says AT&T has five days to match or exceed the offer.

Straight Path, with less than a dozen employees, is one of the largest holders of 28 gigahertz and 39 gigahertz spectrum, the frequencies the Federal Communications Commission has approved for the next generation of wireless communications. 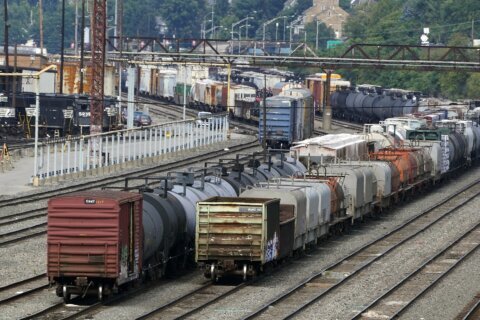