Study: US a difficult environment for working women

As women worldwide celebrate International Women’s Day and participate in the economic demonstration A Day Without a Woman, a new study finds that the United States ranks low among wealthy countries in terms of equal treatment of women in the workplace.
Listen now to WTOP News WTOP.com | Alexa | Google Home | WTOP App | 103.5 FM

WASHINGTON — As women worldwide celebrate International Women’s Day and participate in the economic demonstration A Day Without a Woman, a new study finds that the United States ranks low among wealthy countries in terms of equal treatment of women in the workplace.

The magazine found that the United States ranked Number 20 of 29 wealthy OECD (Organisation for Economic Co-operation and Development) nations when the scores from all categories are combined — down one spot from last year. 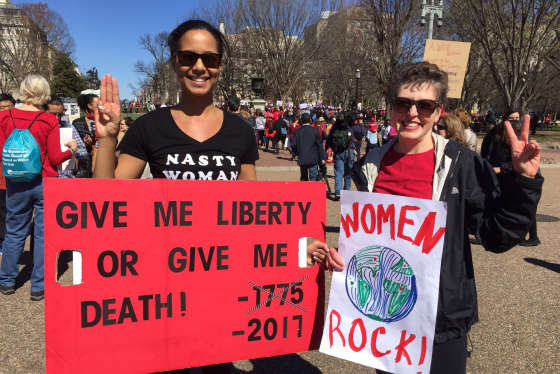 Area restaurants mark a ‘Day without a Woman’

In support of women, D.C. area restaurants are offering specials on food and drinks and giving to charity on this International Women’s Day.

Economist finance correspondent Sasha Nauta told WTOP on Wednesday that the U.S. scored particularly low in three categories: The first was parental leave, “certainly for women, but also increasingly for men,” Nauta said. The U.S. ranks last in this category, because there is no requirement for paid maternity leave.

Nauta also mentioned the high cost of child care (the U.S. ranks 25th out of 29, at 35.1 percent of the average wage) and that there are relatively few women in national government (19.2 percent, also 25th out of 29).

Iceland, Sweden, Norway, Finland and Poland comprise the top five in terms of overall environment for working women, and the top three countries “have been ahead for years, and continue to keep the lead,” Nauta said. “Women there are more educated than men these days (which is also true of the U.S., though to a lesser degree); leave by fathers is becoming increasingly normal, and all those things make a big difference.”

The United States led the 29 nations in one category, Nauta said: the percentage of women in managerial positions, “which is one thing that a lot of European countries actually still have a lot to learn from the States.” The U.S. clocks in at 43.4 percent.

Nauta pointed out that success by professional women builds on itself: “Role models continue to come back as a very important factor in encouraging young women to also make the most of their careers.”

“It’s really across the board that we’ve seen a real slowing down, and in some cases actually a regression, in a lot of these metrics,” Nauta said. Her theory is that the easy work has been done: “The low hanging fruit has been picked, and the stuff that needs to happen now is harder — which is not to say that it shouldn’t happen.”

A lot of companies, including in the U.S., have fairly balanced hiring policies, Nauta said, “so the pipeline is no longer the issue. But something seems to go wrong for a lot of countries, where getting those women to the top in equal representation is really hard.”

She said that flexible working environments and parental leave are the key to the problem both in the U.S. and worldwide, and predicted that those changes would be the hard part.

“There’s a lot of things that still need to happen … but I think it’s going to be a trickier second half of the [process of] getting gender equality in the workplace.”

A Day Without a Woman | rick massimo | working women