A Baltimore school bus was on its way to its first stop Tuesday morning when it rear-ended another vehicle, struck a pillar and swerved into an oncoming commuter bus, killing six people and injuring another 10, said officials
Listen now to WTOP News WTOP.com | Alexa | Google Home | WTOP App | 103.5 FM
(1/9) 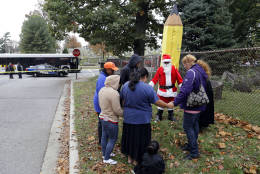 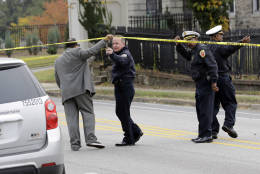 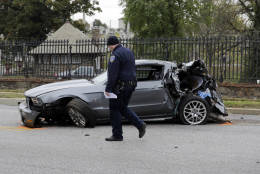 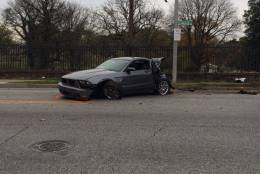 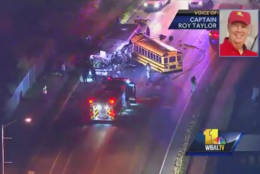 WASHINGTON — A Baltimore school bus was on its way to its first stop Tuesday morning when it rear-ended another vehicle, struck a pillar and swerved into an oncoming commuter bus, killing six people and injuring another 10, said officials.

Around 7 a.m., a Baltimore school bus traveling east on Frederick Avenue to nearby Dallas F. Nicholas Sr. Elementary School hit a silver Ford Mustang and then collided with a pillar at a cemetery entrance hundreds of feet down the street. The school bus then veered into oncoming traffic and slammed into the front driver side of a Maryland Transit Administration commuter bus, ripping the “the entire driver’s side off the bus,” said Baltimore Police spokesman T.J. Smith.

No children were on the school bus at the time of the crash.

Police have not yet released the identities of the people who died, but say they are a 46-year-old woman, a man and woman both 51 years old, and an unidentified man thought to be about 32.

A total of 10 people went to Baltimore-area hospitals for injuries ranging from minor to critical, Smith said. The only other occupant of the school bus, an aide, was taken to a hospital, as were the car driver and eight people from the commuter bus, Smith said.

The cause of the crash is not yet known, but there were no skid marks at the crash scene, which indicates that there was no known deceleration of the school bus, Smith said during a Tuesday afternoon news conference. Smith said that finding is leading police to a working theory that the driver had suffered some sort of medical emergency.

“Our thoughts and prayers go out to the victims, their families, their co-workers, their loved ones. Obviously, folks who were on a bus this time of the morning are working folks,” said Baltimore Police Commissioner Kevin Davis.

The National Transportation Safety Board is investigating the crash, and its lead investigator Jennifer Morrison said the team is beginning the process of gathering information about the crash.

The crash is not believed to be criminal in nature, Smith said.

Crash investigators are still looking for witnesses to help with the investigation. Anyone with information can call police at 410-396-2606.