Baltimore artist makes his point with a brush

A Baltimore City street artist is making his mark with a brush, painting a mural around the corner from the site of Freddie Gray's arrest.
Listen now to WTOP News WTOP.com | Alexa | Google Home | WTOP App | 103.5 FM
(1/3) 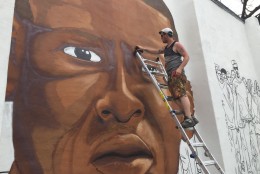 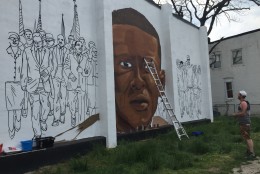 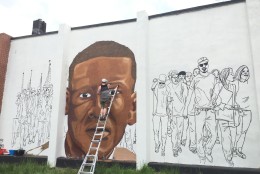 BALTIMORE — Marches, protests and demands for action have followed the death of Freddie Gray, the 25-year-old who died last month after suffering injuries in Baltimore police custody.

Among the varied responses, a Baltimore City street artist is making his mark with a brush.

Justin Nethercut, who prefers to go by Nether, is painting a mural around the corner from the site of Gray’s arrest. “A lot of my artwork is kind of an outcry for the ignored in the city,” he says.

Last week, he was part of the marches around Baltimore. On Sunday, Nether started work on the mural.

“It was an issue that got to me, and really I wanted to continue to push for justice through my artwork,” he says.

The large portrait of Gray is surrounded by civil rights leaders from the 1960s on one side, and family and friends leading the candlelight vigil for Gray on the other. Nether met with Gray’s friends and family to come up with the concept. His work attempts to show importance of movement.

Even unfinished, the mural is already an attraction. People stop by to take photos and discuss the meaning.

A woman who gave her name as LaShawn says it really resonates with the neighborhood.

“Even when the cameras are gone, you can still think back on what’s going on and what’s still the issue here,” she says.