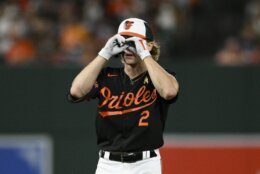 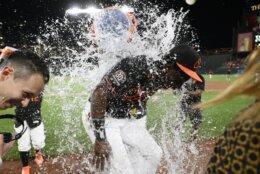 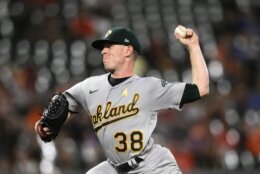 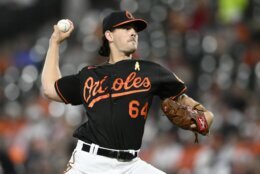 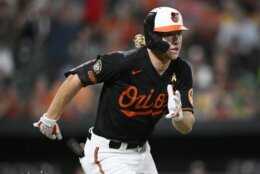 BALTIMORE (AP) — Gunnar Henderson doubled twice in his home debut, Jorge Mateo had a two-run single in a three-run eighth inning, and the Baltimore Orioles beat the Oakland Athletics 5-2 on Friday night.

Another highly touted rookie, Adley Rutschman, put the Orioles in front with a bases-loaded walk as a pinch-hitter in the eighth.

Dean Kremer pitched six solid innings for Baltimore, which improved to 70-61, reaching nine games over .500 for the first time since May 20, 2017. The Orioles entered the day 1 1/2 games out of an AL wild-card spot.

“We’re playing for our lives right now to try and catch people,” Orioles manager Brandon Hyde said. “We’re playing important games in September and that’s never happened since I’ve been here. So that’s a lot of fun, to play the games that matter and not just try to play spoiler, but play for yourself.”

Anthony Santander walked leading off the eighth and Ryan Mountcastle beat out a ground ball off Domingo Acevedo (3-3). Ramón Urías moved the runners to second and third with a sacrifice bunt. Pinch-hitter Cedric Mullins was intentionally walked to load the bases, and Rutschman earned a six-pitch walk. Mateo followed with a single that drove in two more runs.

“We’re a group that never gives up,” Mateo said through a translator. “We’re trying to take advantage of every pitch that we see out there.”

Henderson, rated one of baseball’s top prospects, doubled in the third inning and scored on a bloop double by Robinson Chirinos. Henderson played second base, becoming the first Oriole to start at three different positions in his first three games. He played third base in his big league debut at Cleveland on Wednesday, then moved to his primary position of shortstop the next night.

On Friday, Henderson yielded the shortstop spot back to Mateo, a waiver-wire pickup who has exceeded expectations with sterling defense and timely hitting.

Mountcastle lined a single later in the third that extended the Orioles’ lead to 2-0 off JP Sears. Opponents had been 2 for their last 25 against Sears with runners in scoring position.

The Athletics tied the game on a two-run single by Tony Kemp in the fifth. That ended a scoreless streak of 25 consecutive innings by the Orioles, who had shut out Cleveland in back-to-back games.

“This season hasn’t gone the way we wanted it in terms of wins and losses, but that hasn’t taken away from their character coming out of spring training that they were going to fight, they were going to battle until the last out is made,” Oakland manager Mark Kotsay said. “They’ve done that throughout the season.”

Henderson was ready to enjoy a Baltimore tradition in his first game at Camden Yards.

“I honestly have been looking forward to hearing the ‘O’ in the national anthem,” Henderson said. “That’s been a thing I wanted to hear ever since I got drafted.”

Athletics: OF Ramón Laureano (oblique) went 2 for 4 in a rehab game for Single-A Stockton on Thursday. Manager Mark Kotsay said Laureano could return Tuesday against Atlanta.

Orioles: OF Mullins and C Rutschman were held out of the starting lineup for rest.

Orioles: RHP Austin Voth (4-2, 4.48 ERA) will be making his first career appearance against the Athletics. 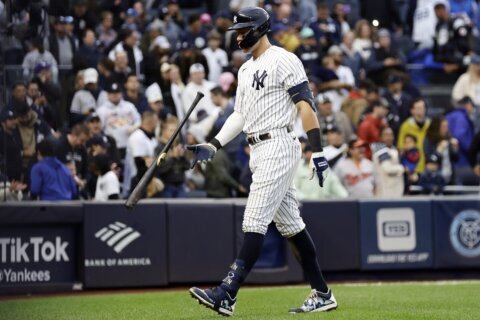 Judge stays at 61 homers on 61st anniversary of Maris’ 61st 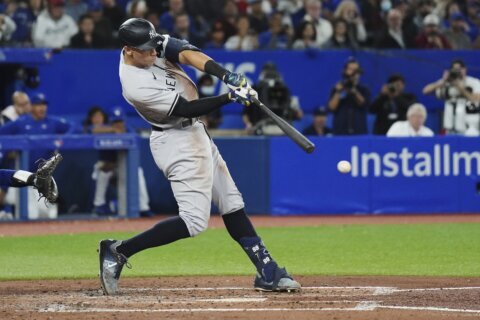