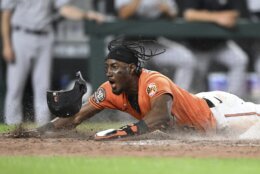 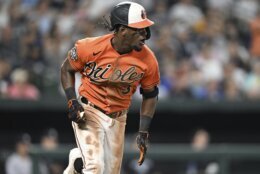 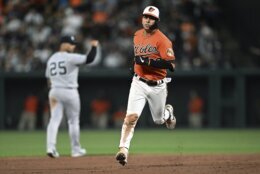 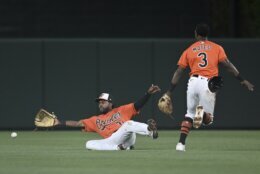 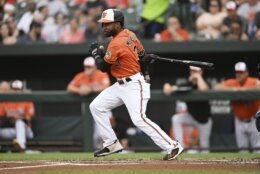 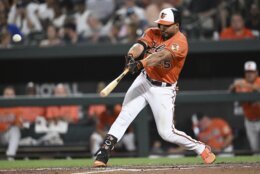 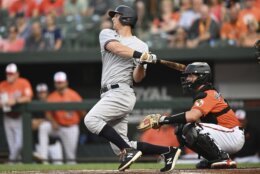 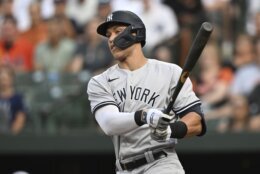 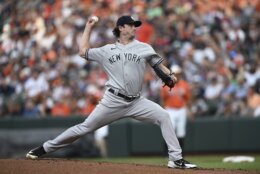 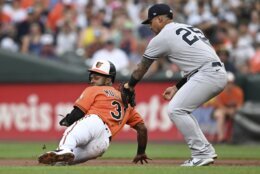 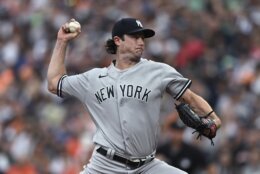 Ramón Urías added a two-run homer in the eighth off Shane Greene, who made his first appearance for the Yankees since he was a rookie in 2014.

“Gerrit Cole is a great pitcher,” manager Brandon Hyde said. “I was really pleased with our at-bats early even though we didn’t score any runs. We made him work. We had a couple of chances and we didn’t score. We finally got to him, and as an ace does, he stayed out there and we were fortunate to tie it with him out there.”

New York went 1 for 14 with runners in scoring position. The Yankees have lost three of four and eight of 12 in their poorest stretch this year and at 65-31 dropped just behind the Los Angeles Dodgers (63-30) for the best record in the major leagues.

“That’s frustrating,” manager Aaron Boone said. “We had chances to really pull away. A ton of traffic. A lot of good at-bats up and down the lineup, but just not able to break through or get that big extra-base hit with guys on base.”

Aaron Judge tied a career-high with four hits and had two RBIs to take over the big league lead with 79. He is 20 for his last 54, raising his average to .292.

Matt Carpenter hit his 14th home run in 89 at-bats for the Yankees this season.

Urías went 3 for 4 and has six multihit games since being reinstated from the injured list on July 4.

“We just stick together,” Urías said. “We’ve been doing it all season. We fight through the whole game and we don’t give up. that’s huge for us.”

Cionel Pérez (5-1) pitched a scoreless seventh and Jorge López got his 18th save in 22 chances. After New York’s first two batters reached in the ninth, Anthony Rizzo grounded out, Gleyber Torres flied out to Ryan McKenna, who made a nice running grab in short right, and Josh Donaldson took a called third strike.

“A little unfortunate that they just found some holes,” Cole said. “It was a good pitch to Mullins, good pitch to Mateo, not a good pitch to Urías but bad contact. That’s their game. They don’t swing and miss a whole lot. They’re really tough to strike out. They’re shifty with their aggressiveness and they put the ball in play.”

Judge’s RBI double in the first, Carpenter’s homer over the right-field scoreboard in the second and Judge’s bloop RBI single in the fourth built a 3-0 lead.

Abreu relieved and threw past first for an error as Mateo took third and Mullins followed with a sacrifice fly.

“As soon as the ball bounced, I immediately thought third base all the way,” Mateo said.

Urías homered off Greene, who was brought up from Triple-A Scranton/Wilkes-Barre after Michael King’s season-ending elbow injury on Friday night. Now 33, Greene was dealt to Detroit after the 2014 season as part of the three-team trade that brought New York shortstop Didi Gregorius.

Yankees: RHP Clarke Schmidt was recalled from Scranton. … RHP Shane Greene was signed from RailRiders. … RHP Tim Locastro was optioned to the RailRiders.

Yankees: King fractured his right elbow throwing a pitch in the eighth inning Friday night. He was 6-3 with one save and a 2.29 ERA in 34 games, striking out 66 in 51 innings.

Yankees: LHP Nestor Cortes (7-3, 2.63 ERA) has made six starts in which he’s thrown six or more innings and allowed one or fewer runs. 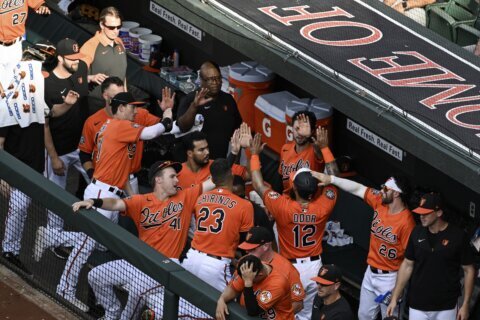