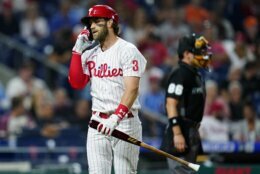 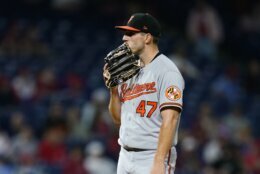 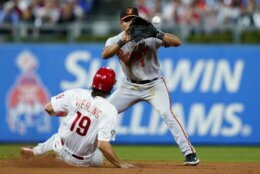 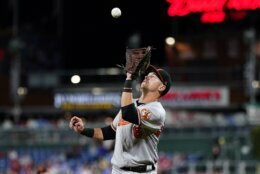 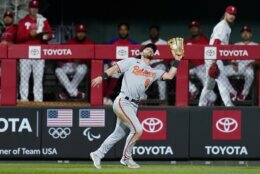 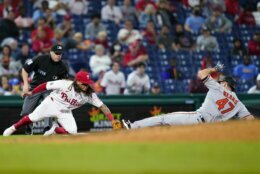 PHILADELPHIA (AP) — Bryce Harper gave the 96 mph fastball a deep ride that had a few thousand straggling fans that paid for $1 hot dogs and a pennant race standing in euphoria.

Harper’s ball landed 401 feet away in Baltimore center fielder Cedric Mullins’s glove, the first out in the ninth inning of a futile effort for the Phillies against the worst team in baseball.

He was just short. The Phillies can only hope they don’t end that way in the NL East race.

John Means struck out six and stymied Harper and a Phillies team in an eleventh-hour playoff push to lead the Baltimore Orioles to a 2-0 win Monday night.

“We just weren’t able to come up with a big hit,” Philadelphia manager Joe Girardi said.

The Phillies had just four hits against Means (6-7) and two relievers.

Losers of two straight, the Phillies dropped three games behind Atlanta in the NL East after the Braves beat the 102-loss Diamondbacks 11-4 later Monday. Philadelphia is 4½ games behind St. Louis for the second wild card. Cincinnati and San Diego also lead the Phillies in the wild-card chase.

The Phillies opened a seven-game homestand with three against the 102-loss Orioles and four more against a Pittsburgh Pirates team inching toward 100 losses.

“It’s not how you want to start the homestand,” Girardi said, “but it doesn’t tell the whole story. We’ve gotta turn it around tomorrow and let’s see what happens the rest of the week.”

The Phillies desperately needed to pile up wins against two teams playing out the string if they wanted next week’s three-game set in Atlanta to have any postseason implications.

Here’s what they got instead: an offense led by Harper, an NL MVP candidate, handcuffed by Means, who tossed four-hit ball pitching into the seventh. Means, who pitched a no-hitter May 5, even doubled in the seventh for his first career extra-base hit.

Means yielded to righty Cole Sulser with runners on the corners, and he retired Freddy Galvis on a flyball to right to end the seventh.

“This felt like more my style of pitching,” Means said.

Harper, who led MLB with a 1.052 OPS, walked in the first inning, struck out swinging in the fourth and the sixth innings against Means. Harper represented the tying run but flew out to end the game a night earlier in a 4-2 loss to the Mets.

The slugging outfielder has been tasked with carrying the Phillies to the playoffs for the first time since 2011 without much help around him. Harper hit one to the wall in the ninth against Tyler Wells. Wells then retired J.T. Realmuto and Andrew McCutchen for his third save.

The Phillies were booed off the field.

Ranger Suarez (6-5) gave up consecutive RBI singles to Pedro Severino and Ryan McKenna in the first inning before he settled down in a game he needed to win. He struck out five and his ERA bumped to 1.60.

The Phillies are in the playoff race, though years of mediocre baseball and the start of the Eagles season sapped the city of enthusiasm for the September stretch run. The team announced 21,440 fans — though far less than that seemed on hand.

Losing to the Orioles won’t put a spark in the city. Or fans in the seats.

Girardi said before the game pennant races are always fun.

This one, though, crushed the Phillies.

“When you think of all the work you’ve put in to get to this point, to have an opportunity to get into the playoffs, to be relevant in your division,” it’s fun, Girardi said. “It really starts the day after last year’s season. You start planning. You start working. Players start doing things. This is what it is all about. All that stuff you did in November and December, January and February, this is what it is all about. We’re fortunate to be in this position. So you have to take advantage of it.”

Again, the Phillies couldn’t take advantage against one of the worst teams in baseball. Arizona swept the Phillies in a three-game set in mid-August and the sub-.500 Rockies took three of four in Philly earlier this month.

Mullins did not start. He has 29 home runs and 30 stolen bases. He entered for defense on a double-switch in the ninth.

Orioles: RHP Chris Ellis has arm fatigue and his next scheduled start will be pushed back.

“If that’s my last at-bat, I’m happy with it.” — Means, on his double and the possibility of MLB using a universal DH next season.

The Orioles and Phillies are each throwing bullpen games with openers TBD.