Rob Refsnyder bounced back from a run-in with the center-field fence to score the go-ahead run in the 10th inning on a wild pitch and the Minnesota Twins handed the Baltimore Orioles their 14th straight loss, 3-2 on Monday.
Listen now to WTOP News WTOP.com | Alexa | Google Home | WTOP App | 103.5 FM

BALTIMORE (AP) — Rob Refsnyder bounced back from a run-in with the center-field fence to score the go-ahead run in the 10th inning on a wild pitch and the Minnesota Twins handed the Baltimore Orioles their 14th straight loss, 3-2 on Monday.

The Orioles’ skid ties for second-longest in team history — they also dropped 14 in a row in 1954, the season the club moved from St. Louis to Baltimore. The Orioles’ worst losing streak came in 1988 when they lost their first 21 games of the year.

It’s the longest losing drought in the majors since the Astros lost 15 in a row in 2013.

“It’s been tough last couple weeks, but we’re trying to keep our head up and trying to keep playing hard,” said Ryan Mountcastle, who homered for Baltimore’s first run. “We’ve been in a lot of close games and we’ve just got to try to turn the page and move on to the next one and hopefully win tomorrow.”

The Twins have beaten Baltimore 16 consecutive times, one away from Minnesota’s franchise record against one opponent. The Twins topped Boston 17 straight times in 1965-66.

Refsnyder smacked into the padded wall chasing Mountcastle’s home run in the fifth that flew well over the fence. Refsnyder went down hard on the warning track but stayed in the game.

“They should take a look at that fence, to be honest,” Twins manager Rocco Baldelli said. “(Refsnyder) came out OK. He might have shaken himself up a little bit, but he flat-out ran into the wall. Everyone was checking on him. He’s not going to be deterred very easily from getting back out on the field.”

It was 1-all when Refsnyder began the 10th as the automatic runner at second base. He moved to third on Kyle Garlick’s grounder and scored easily with a headfirst slide when Adam Plutko (1-2) threw a pitch in the dirt.

Jorge Polanco followed with a homer over the right-field scoreboard.

After Taylor Rogers (1-2) contained the Orioles in the ninth, DJ Stewart had an RBI single off Hansel Robles in the extra frame. After Stewart moved to third on a wild pitch, Robles got out of the jam and earned his fourth save with two strikeouts and a flyball.

“I think I got really mad at myself with the double,” Robles said. “I just had to settle in and execute my pitches. I think that’s what I did.”

Minnesota starter Jose Berrios allowed one run and four hits with six strikeouts and no walks over eight innings.

The Twins took a 1-0 lead in the third when Garlick singled, stole second and scored on Polanco’s infield out.

Berrios retired 13 in a row until Mountcastle homered.

Josh Donaldson had three hits for the Twins.

“Offensively, we’re really close,” Donaldson said. “At the end of the day, you just have to keep going up there and having confidence and trusting the at-bats.”

Orioles: Selected the contract of C Austin Wynns from Triple-A Norfolk and optioned C Chance Sisco to the Tides.

Twins: OF Trevor Larnach, who has batted .357 with two home runs over the past six games, was held out of the lineup after fouling a ball off his foot against the Royals on Sunday. The rookie was placed in a walking boot following the game. “He’s not moving around great and that is why he is not playing,” Baldelli said. … OF Byron Buxton (right hip strain) is running on the treadmill but the team wants to see how he “decelerates” before getting him back in the lineup. “He’s making great progress,” Baldelli said.

Orioles: SS Freddy Galvis has been dealing with “nagging things going on” and did not start, manager Brandon Hyde said. Galvis entered as a pinch hitter in the eighth and struck out. … INF Richie Martin (left wrist fracture) was placed on the 60-day injured list.

Twins: RHP Michael Pineda (3-2, 2.62 ERA) will make his second start since returning from the injured list (abscess). He allowed one run over six innings with a season-high eight strikeouts against the Orioles on Wednesday.

Orioles: LHP Bruce Zimmermann (2-3, 5.15 ERA) has not completed six innings since his second start of the season. 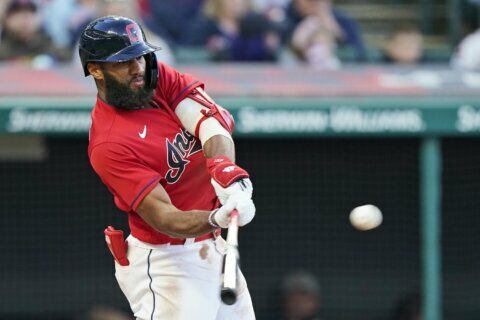 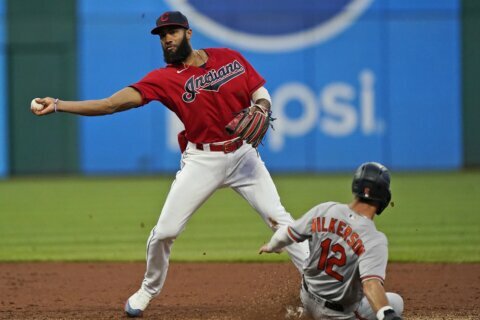