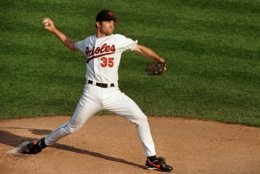 WASHINGTON — The Moose is headed to Cooperstown.

Former Orioles pitcher Mike Mussina has been voted into Baseball’s Hall of Fame, reaching Cooperstown in his sixth year of eligibility.

The Stanford-educated Mussina made his major league debut on August 4, 1991 and quickly became a fixture in the Orioles’ rotation. From 1992-99 the right-hander averaged over 30 starts and 16 wins per season while being named an All Star five times.

After an 11-15, 3.79 ERA campaign in 2000 Mussina signed as a free agent with the New York Yankees where he spent the remainder of his career.