Hong Kong — Taiwan’s president and foreign minister both raised warnings on Tuesday of a hypothetical Chinese invasion of their island. The officials issued the warnings of a possible war with China after Beijing flew a record number of military planes into Taiwan’s “Air Defense Identification Zone” between Friday and Monday.

“If Taiwan were to fall, the consequences would be catastrophic for regional peace and the democratic alliance system,” wrote President Tsai Ying-wen in Foreign Affairs. “It would signal that in today’s global contest of values, authoritarianism has the upper hand over democracy.”

China considers democratically-governed Taiwan a renegade province. President Xi Jinping, widely seen as China’s most powerful leader since Mao Zedong, has vowed to reunify the island, and he hasn’t ruled out the use of military force to do so.

The almost 150 sorties flown by the People’s Liberation Army over four days represented Beijing’s most aggressive military posturing to date with Taiwan, and they drew warnings from the Biden administration. 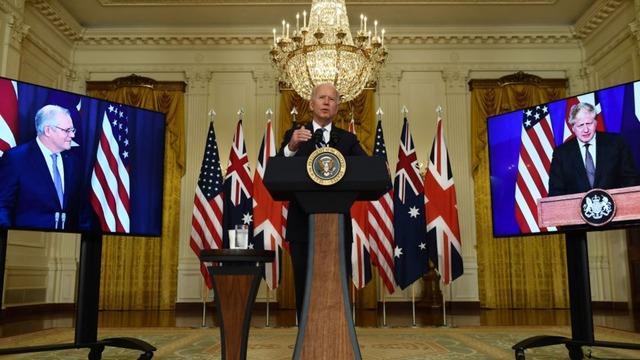 What new AUKUS pact means for U.S. and China

“We urge Beijing to cease its military, diplomatic, and economic pressure and coercion against Taiwan,” White House spokesperson Jen Psaki told reporters on Monday. “We have an abiding interest in peace and stability across the Taiwan Strait. That’s why we’ll continue to assist Taiwan in maintaining a sufficient self-defense capability.”

“We urge Beijing to cease its military, diplomatic, and economic pressure and coercion against Taiwan,” the U.S. State Department said in a statement released on Sunday evening.

Taiwan’s Foreign Minister Joseph Wu said his country was preparing for China to launch an invasion.

On October 1, as modern China celebrated the 72nd anniversary of its founding, 38 People’s Liberation Army aircraft flew close to southwest Taiwan before circling back. The next day, Chinese planes flew 39 more sorties. Sunday saw 16 more flights, all following a similar path. On Monday, Taiwan’s defense ministry said another 52 Chinese military planes had entered the island’s air defense zone — by far the most ever in a single day — bringing the total over four days to 145 flights.

Taiwan and its approximately 24 million people — a population on par with Australia’s — consider the island a sovereign nation. The U.S. and its allies try to walk an incredibly fine line: A pledge to defend Taiwan from external threats is literally written into U.S. law, but Washington also does not treat Taiwan as an entirely independent nation.

Under the 1979 Taiwan Relations Act, passed by the U.S. Congress after Washington switched official diplomatic recognition to Beijing from Taipei, Washington is obligated to support Taiwan’s defense capabilities against China.

In August, the Biden administration approved its first arms sales to Taiwan — a $750 million proposal that includes howitzer artillery units, armored vehicles and machine guns. The Trump administration in 2020 approved a $1.8 billion arms deal to Taiwan. Past sales have also included fighter jets and missiles.

This year, the Economist Intelligence Unit ranked Taiwan as the most democratic country in East Asia, and the 11th most democratic in the world. China, labelled an authoritarian regime, was ranked at number 151. The Washington-based Freedom House organization ranked Taiwan as the second-freest country or territory in Asia after Japan, and the seventh freest in the world. The group ranked China as “not free.”

Taiwan’s Foreign Affairs Ministry provided a statement saying it was “deeply grateful that the Biden administration took the initiative to issue this statement over the weekend to condemn China’s provocative actions and reiterate its commitment to Taiwan.”

“Taiwan is an advocate of peace in East Asia,” said Taipei city spokesman and former ambassador Tom Chou in response to a CBS News request for comment from the mayor’s office. “The record number of intrusions into Taiwan’s airspace from China’s PLA (People’s Liberation Army) is a serious threat to Taiwan and will destabilize the status quo of peace in East Asia,”

“Taiwan plays an important role in global hi-tech supply chains, in particular semiconductor industry,” noted Chou. “If the crisis is not handled properly, the world’s hi-tech supply chains will be adversely affected [and] that will further slow down the pace of the global economic recovery. This explains why the United States has come forward to tell China to stop its intrusions into Taiwan’s airspace. The people of Taiwan are very grateful to the United States for extending a helping hand during this crisis.”