We see them everywhere – tributes to the men and women who played a role in our history. We see new statues going up, and old ones coming down. But sometimes, we don’t even think about the art behind the image.

Ivan Schwartz is a classically-trained sculptor who turned his art into a business, when he and his brother, Elliot, opened their Brooklyn, New York studio, EIS, in 1977.

From Anne Frank at the National World War II Museum in New Orleans, and Abraham Lincoln seated at Gettysburg, to all of the women represented at the Virginia Women’s Monument, the work of Schwartz’s team can be seen pretty much everywhere.

“I often have to sit and think, ‘Well, where is that going to begin?'”

CBS News chief Washington correspondent Chip Reid asked, “There’s that famous quote from Michelangelo or somebody, ‘You just chip away from the marble, whatever does not look like the person.’ Makes it sounds so simple. It’s not that simple!”

Schwartz works in a style similar to that of Michelangelo and many other great sculptors: he oversees the work of a team of skilled artists: “These guys can do what I used to do way better than I ever could. It just begins with the vision. I leave the real world, and enter a little fantasy world where I am thinking, ‘What are you gonna’ do with this person who’s been represented so many times before?'” 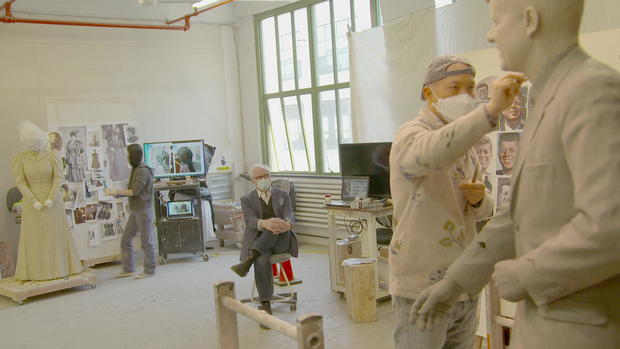 A monumental hurdle for this particular commission – a sculpture of President John F. Kennedy, a new addition to the Kennedy Center for the Performing Arts in celebration of its 50th year, an undertaking funded by billionaire investor and philanthropist David Rubenstein.

Schwartz said, “When you look at pictures of Kennedy, he was smiling, he was the great new president who was on television. And we saw him all the time.”

Young, handsome, and energetic, the public came to know his face, his gestures long before he was immortalized by his assassination in 1963. So, any physical representation of him had to be realistic.

“The client – in this case, the Kennedy Center – all they told us was that they wanted something that was approachable,” said Schwartz. “So, we all sort of bang our heads together, and then begin looking at the imagery.”

Debra Schwartz is director of projects at Studio EIS, and is sister to Ivan and Elliot. She told Reid, “I would say I looked at 33,000 photographs. And I looked at movies, videos of Kennedy. I went through everything about Kennedy – his jacket, his hair, his tie, his handkerchief in his pocket, his shoes, his socks, his cuff links … very meticulous.”

And it is this measure of study and observation that makes Schwartz’ statues particularly relatable.

Ivan said, “Now, none of us knew this, but as we started watching films, he would constantly touch his coat jacket button. We almost begin to laugh every time we see it, because, ‘Oh, look, there it is again!'”

The button in clay.

When the idea comes through, the crafting begins, from the clay foundation … 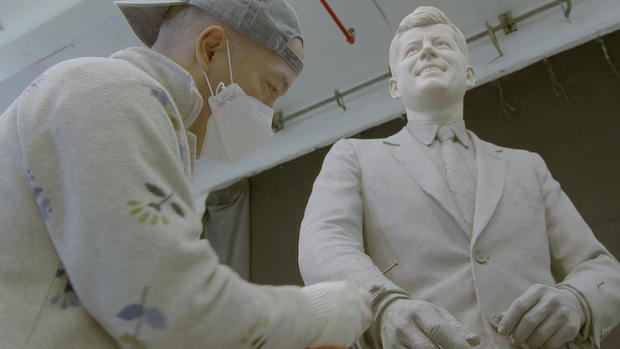 Finishing touches on the model of a statue of President John F. Kennedy, to be cast in bronze.

… making the mold and pouring the bronze … 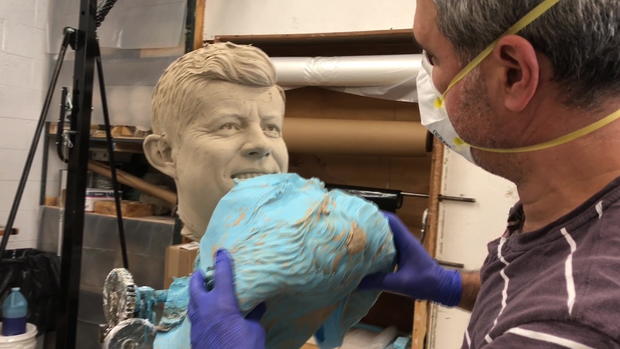 to the finishing touches. Each step of the process belongs to an artist. 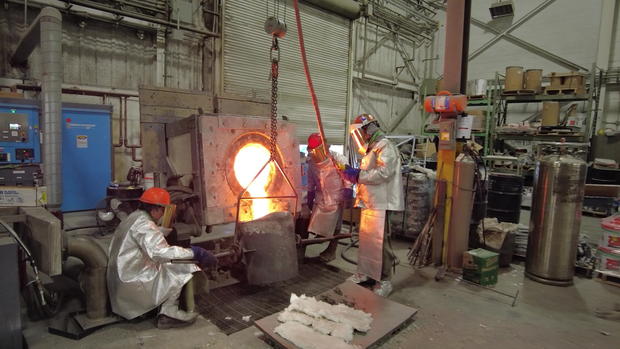 Ivan said, “Not every day, but some days, we get to make sculptures of people who have meant something, who’ve done something, whose contribution to our lives, American life, has had meaning. And those people become symbols for future generations.”

Now, Schwartz and his team can sit back and hope that this piece will be received in the way it was intended – a familiar representation of a man who meant so much to so many. 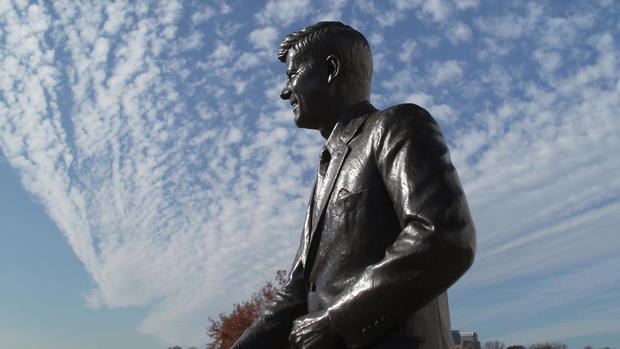 A statue of President John F. Kennedy, at the Kennedy Center for the Performing Arts in Washington, D.C. 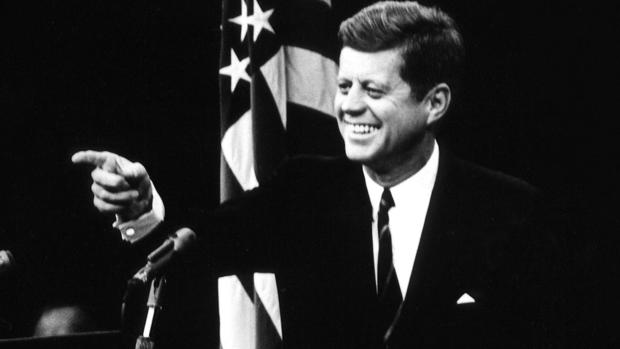 Marcel Duchamp and the meaning of art

‘Anything Goes’ to steam into U.S. movie theaters in spring