Not only did they get more than 1,000 cards from local and abroad, but Arlington County police officer Kyle Hoffman also organized a procession to honor his work as a military dog overseas two days before he died.
Listen now to WTOP News WTOP.com | Alexa | Google Home | WTOP App | 103.5 FM
(1/5) 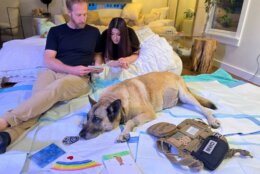 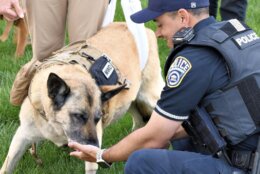 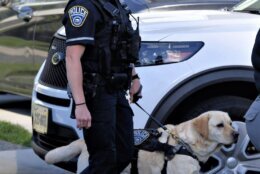 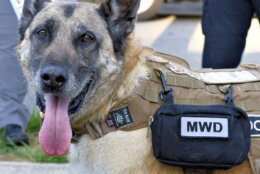 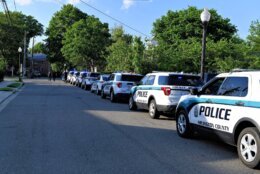 It’s never easy to lose a pet, but the Arlington, Virginia, community is rallying around a local family with a special story of a dog with an extensive history of serving others abroad.

Mina Harriman was doing humanitarian work in Afghanistan when she rescued Rony, a Belgian Malinois about nine years ago.

“Our family had a very special bond with Rony,” said Mina who now lives in the Ballston area with her family.

He had served more than 380 missions as a bomb sniffing dog. But when his handler was killed by an improvised explosive device (IED), Mina said Rony was going to be put down.

So, she took him home with her, and the rest is history. 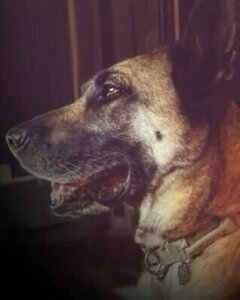 Mina and her family posted his story online and asked for cards to read to Rony because at 13 years old, he was dying of cancer.

“I feel like it’s so fitting and consistent around his mission in life that even in his death, he continues to inspire people with his story,” Mina said.

Not only did they get more than 1,000 cards from local and abroad, but Arlington County police officer Kyle Hoffman also organized a procession to honor his work as a military dog overseas two days before he died.

Almost twenty officers showed up with their cars and a few working K9s.

They gave him a special procession to honor his work and all veterans and working dogs.

“We wanted to show the family and Rony our appreciation and our gratitude for their service and for Rony’s service,” Hoffman said.

He said Rony enjoyed the treats and Rony’s family said he actually stood up for the first time in a while during the procession.

But Hoffman said the reality was tough.

“It’s a really hard hitting feeling knowing that in front of us was this dog who’s spent his entire life serving overseas and protecting people in war zones,” Hoffman said.

Mina’s husband Jake Harriman is a former Marine and said he connected with Rony on many levels.

“I know a lot about the struggles that veterans have when they come back from overseas having been in combat and for us as veterans, we get a chance to talk about it, you know, we get a chance to kind of work through a lot of our struggles, when we come back from combat,” Jake said. “But these amazing animals as they come back, they don’t have that opportunity. They struggle with a lot of the same kind of trauma and they have sacrificed so much and have been so brave.”

“My mom and I would travel all the time and he would come with all of our trips and he stayed at the nicest hotels with us and walked around and beaches and a lot of other dogs,” Trinity said. “Everywhere he went, he always found a friend.”

Rony’s family doesn’t want his story to stop here. They are going to write a children’s book about Rony and other working dogs to spread the story of the sacrifices they make and how inspirational these animals are to others.

“We want to share the stories of how the dogs trained and how much they sacrificed,” Trinity said.