A Tiffany-stained glass window salvaged from the Abbey Mausoleum in Arlington, Virginia, has a storied past and is now on track for a new future.
Listen now to WTOP News WTOP.com | Alexa | Google Home | WTOP App | 103.5 FM
(1/5) 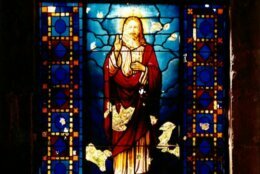 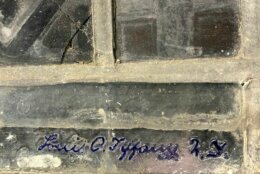 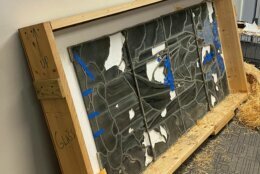 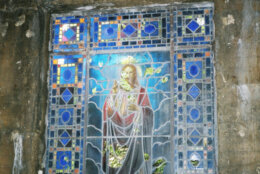 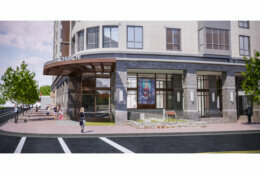 A Tiffany-stained glass window salvaged from the Abbey Mausoleum in Arlington, Virginia, has a storied past and is now on track for a new future.

Arlington Now first reported that the “Christ in Blessing,” circa 1934, will be incorporated into a Ballston development project that includes the Central United Methodist Church.

“The thing about the central window ‘Christ in Blessing’ is that it was severely damaged and needs restoration. It’s also larger than any of the other panels (9 feet by 6 feet). So we had to find the right fit with the right building that has enough room to house this magnificent window,” he said.

When the Abbey Mausoleum was built in the 1920s, it was considered one of the most prestigious burial grounds in the D.C. area. By World War II, it became surrounded by Henderson Hall and the Navy annex, and it lost some of its luster. Then, the foundation that ran it went bankrupt.

“And so for the next 40 years, it was basically an abandoned burial ground, and it was subject to vandalism and teenagers hanging out, etc.,” Byers said.

When the U.S. Navy acquired the building and decided to tear it down after occupants were relocated, an agreement with the county, Arlington Arts and Arlington Historic Preservation allowed architectural elements to be salvaged from the building.

An inscription “Louis C. Tiffany N.Y.” was discovered in the lower right-hand corner of the “Christ in Blessing” panel.

Arlington Arts states that the inscription coincides with those used by Louis C. Tiffany at the time the window was created, which it believes confirms authenticity to the degree possible lacking written documentation on its commission.

Last weekend, the Arlington County Board approved the deal for the Boston Limited Partnership with the housing authority to build a new eight-story building on the current site of the Central United Methodist Church on Fairfax Drive, which will be demolished and incorporated into the new structure. The new development will also include housing at various price points and a child care facility.

The “Christ in Blessing” panel will be visible from the street and the general public will have times allowed into the church to view the Tiffany windows from inside the church. The restoration and location of the pieces was a collaborative effort by Arlington Public Art, Arlington’s Historic Preservation Program, Central United Methodist Church and the Ballston Limited Partnership.

Construction is scheduled to begin in the next couple months, with plans for the project to conclude in spring 2024.

Three windows were restored using matching glass fragments from other mausoleum windows that were damaged beyond repair. The windows now appear as they did when first installed at the Abbey Mausoleum decades ago. You can see them at the Arlington Arts Center, the Westover Library and the Fairlington Community Center.

The Fairlington Community Center, has the Abbey Mausoleum’s original skylight, which was also by Tiffany, Byers said.