Two pieces of steel from the World Trade Center will now be on permanent display in D.C. and Virginia ahead of the 20th anniversary of the 9/11 attacks.
Listen now to WTOP News WTOP.com | Alexa | Google Home | WTOP App | 103.5 FM
(1/3) 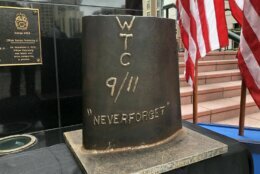 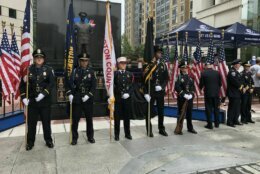 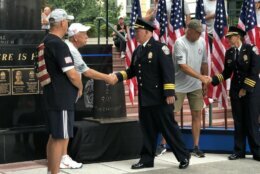 Two pieces of steel from the World Trade Center will now be on permanent display in D.C. and Virginia ahead of the 20th anniversary of the 9/11 terror attacks.

The words “never forget” are written on the front of a piece of steel beam unveiled during a ceremony in front of the Arlington County Police Officer Memorial on Sunday.

It will be on display at the Arlington County Police Department.

“It’s incredibly meaningful and impactful. It’s important that we all pause to remember and reflect on all the lives that were tragically lost that day,” Penn said.

D.C. Fire and EMS got a piece of beam as well at a ceremony at the D.C. Armory on Sunday.

Both beam pieces were donated by the Tunnel to Towers Foundation.

The beam donations were part of a celebration kickoff for the “Never Forget Walk,” in which the CEO of Tunnel to Towers, Frank Siller, is walking from Virginia to the site of the World Trade Center in honor of his brother and all the lives lost in the Sept. 11 terrorist attacks.

The District’s beam will be permanently displayed at the D.C. Fire and EMS Training Academy.

Penn said their piece of beam has special significance to them, as they lost a member of their department, Harvey Snook, in 2016, to cancer related to his work in the recovery efforts at the Pentagon.

U.S. Sen. Joni Ernst of Iowa was at the Arlington County ceremony and said it was special to see the beam piece donated to serve as a reminder of the sacrifices first responders make.

She is a veteran of Operation Iraqi Freedom and served with the Iowa Army National Guard.

“It’s just very important and meaningful to the folks that work here, serve here, to see that we’re all connected and that we all will never forget the great men and women that have served our nation in so many different capacities,” Ernst said.