Residents in Arlington County are being asked to give their opinions on whether guns should be banned on public property.
Listen now to WTOP News WTOP.com | Alexa | Google Home | WTOP App | 103.5 FM

Residents in Arlington County are being asked to give their opinions on whether guns should be banned on public property in the Virginia county.

The Arlington County Board decided to hold a public hearing on the matter as it considers a measure that would prohibit people from carrying firearms in county-owned buildings, parks and recreation centers.

The ordinance would apply to people who have concealed carry permits.

The measure would make it a misdemeanor. Violators could face one year in jail or a $2,500 fine or both, if convicted.

“This law allows local governments who know their communities best to exercise their authority based on the values and the will of the voters who actually live in their communities,” said Del. Patrick A. Hope, a Democrat who represents the Arlington area.

The measure being considered in Arlington is nearly identical to one passed last month by the Alexandria City Council.

It would include banning guns on any public street, sidewalk, right-of-way or public place being used for next to a county-permitted event.

“What is fundamentally important is that the areas where weapons are banned must be properly signed so the public is aware,” said Arlington County Attorney Stephen MacIsaac.

“This is not a situation where someone is going to be surprised about the fact that they cannot carry a weapon there.”

Supporters of the idea argue that fewer guns in public will make everyone safer. But during a Wednesday meeting, county board members heard from some opponents who said that the only thing it would do is make it more difficult for residents to protect themselves.

“The people most heavily impacted by the proposed ordinance would be those who carry firearms because of threats against their lives.”

In explaining the proposal, MacIsaac brought up the mass shooting that happened in Virginia Beach last year when a city engineer killed 12 people in his workplace.

Barratt argued that the proposal would not prevent something like that from happening.

“A gun ban would not stop a mass murderer like the Virginia Beach city employee unless you’re planning on having armed guards search every employee and member of the public entering government buildings,” said Barratt.

A public hearing on the issue is expected in Sept. 12. 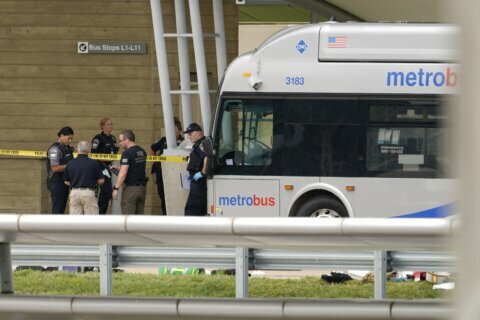 Man who fatally stabbed Pentagon officer had troubled past