Both the suspect and the yet-to-be-named female victim are expected to survive after the shooting inside a Crystal City office building.
Listen now to WTOP News WTOP.com | Alexa | Google Home | WTOP App | 103.5 FM
(1/4) 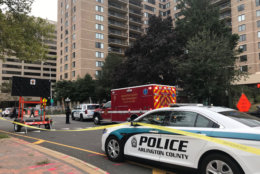 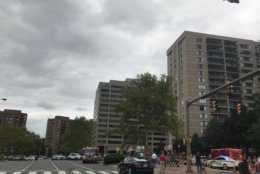 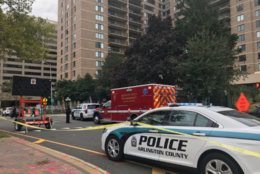 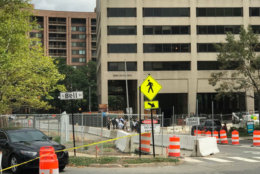 Warrants for aggravated malicious wounding, felon in possession of a firearm, and use of a firearm in the commission of a felony have been issued for Mumeet Muhammed.

Both the suspect and the yet-to-be-named female victim were reported to be hospitalized in critical but stable condition after the attack, which occurred at 1550 Crystal Drive.

Around noon Wednesday, police received multiple 911 calls of “a possible domestic situation involving a firearm.” After forcing his way into the office, investigators said, the suspect assaulted the victim.

“Arriving officers made contact with the parties, and during the course of the incident, the suspect and an officer discharged their weapons,” police said in a statement Wednesday evening.

Both the victim and suspect are expected to survive.

Reporting from the scene, WTOP’s Megan Cloherty said people around the site had been asked to shelter in place. But that order was later lifted.

Office workers who had been escorted out of the building by police were instructed not to talk.