Plans coming together for redevelopment of Ballston Harris Teeter

Harris Teeter's owners are hoping to team up with a Georgia-based developer to build 700 residential units on the site of a former Mercedez Benz dealership in Ballston. All told, the development would include 83,600 square feet of retail on the ground floor of two buildings.
Listen now to WTOP News WTOP.com | Alexa | Google Home | WTOP App | 103.5 FM
(1/6) 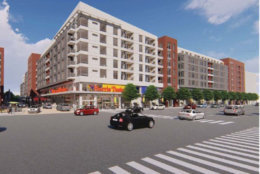 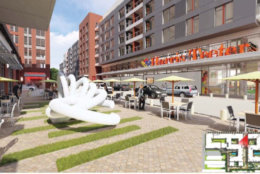 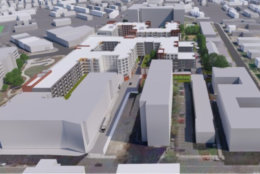 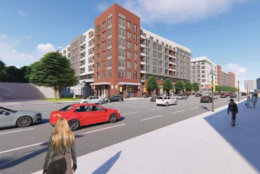 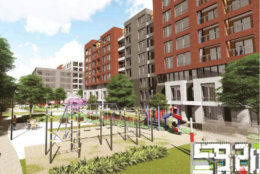 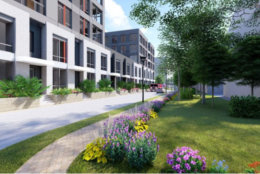 Plans seem to be taking shape for a full redevelopment of the Harris Teeter and adjacent Mercedes Benz dealership lot in Ballston.

The grocery store’s owners are hoping to team up with a Georgia-based developer to build 700 residential units on the property with 83,600 square feet of retail on the ground floor of two buildings, including a newly renovated Harris Teeter store to replace the existing location.

The plans match the county’s long-term goal of transforming the Glebe Road property into a mixed-use community.

Though the plans are still conceptual at the moment, the developer provided some details to owners at the neighboring Hyde Park Condominiums — an anonymous tipster provided a copy of a presentation sketching out the redevelopment to ARLnow. Helen Duong, a spokeswoman for the county’s planning office, said that there’s a meeting scheduled today (Tuesday) for the developer to submit preliminary plans on the project.

A lawyer working on the development effort declined to comment. But the presentation, dated July 30, shows that the developer is envisioning buildings anywhere from six to eight stories tall, in addition to adding a half-acre park on the site. The plans also call for as many as 974 parking spaces to serve the new buildings.

Back in 2013, the County Board approved some policy changes to allow for more density on the site, in light of Ballston’s rapid development along Wilson Blvd. County staff wrote at the time that redeveloping the area would enhance “the southern gateway of Ballston” and transform N. Glebe Road into “an urban boulevard.”

The Board even approved zoning changes to allow buildings anywhere from 12 to 14 stories tall, so the current proposal, backed by the development firm Southeastern, is less dense than the county envisioned. However, it does call for many of the same transportation improvements the county sketched out at the time, including an extension of N. Tazewell Street from where it meets with N. Carlin Springs Road, running through the property.

Harris Teeter envisions building a new, 70,600-square-foot store on the site, complete with an “improved layout” and “improved customer experience and offerings,” according to the presentation. The old store would remain open as workers built the new one, complete with 390 housing units stacked on top.

Plans are a bit less set in stone for the height of each residential building. One option included in the plan calls for both buildings to be eight stories tall, provided the developer can win some policy changes from the county — another option envisions an eight-story building located on the current pre-owned Mercedes lot, and six-story building where the Harris Teeter is currently, closest to the Hyde Park condos.

Ballston Business Improvement District CEO Tina Leone declined to comment on the exact details of the plans, but said “we are very pleased and supportive to see community-building development happening here.”