Arlington has a long history with artists and groundbreaking sounds. That storied tradition continues this week with the launch of Arlington Art Truck, which brings art to the people.
Listen now to WTOP News WTOP.com | Alexa | Google Home | WTOP App | 103.5 FM

ARLINGTON, Va. — If home is where the heart is, as far as Arlington County is concerned, art is where the people are.

Originally a part of the “10 miles square” parcel of land surveyed in 1791 to be the nation’s capital, Arlington has spawned some of the D.C. area’s most creative and forward-thinking attitudes toward art projects for the past four decades, ranging from music, to community sculpture, to providing creative workspaces for artists.

This week, Arlington Art Truck has launched, under the guidance of Cynthia Connolly, an influential photographer, letterpress artist and curator known for her contributions to D.C.’s 1980s punk rock scene.

“The Arlington Art Truck is a van that is basically a mobile toolbox,” said Connolly, whose official title is Arlington Cultural Affairs Special Projects Curator. 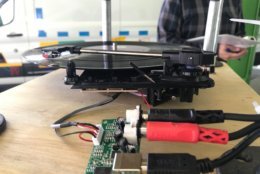 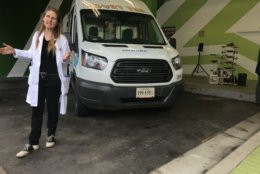 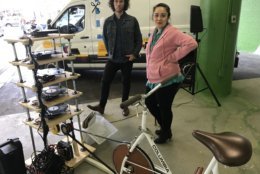 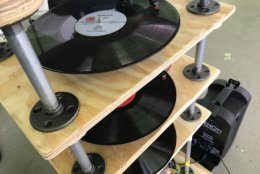 “An artist will drive somewhere with me, we unload the project on a street, or park, or sidewalk in Arlington, and we invite people to interact with the artist,” she said.

The blending of art in the community is familiar for Connolly, given her connection with the “do-it-yourself” ethos that has permeated her work since she booked bands at d.c. space and created the black sheep logo on the cover of Minor Threat’s 1983 album “Out of Step.”

In shepherding the initial offering of Art Truck, Connolly is showcasing an eye-catching and ear-catching piece, using sound in sculpture.

Connolly said Arlington has a long history with artists — and groundbreaking sounds.

“There have been a lot of group houses that housed independent record labels in the 80s and 90s, including one I was part of  — Dischord Records.”

“The fact that the Metro opened, and when it went as far as Ballston (in 1979), that was another reason people moved,” Connolly said. “Dischord was near Clarendon, and you could take the Metro and walk from the Metro, so that was a big deal.”

In addition to Dischord, punk and new wave labels based in Arlington included Simple Machines, TeenBeat Records and Wasp Records.

Now, in a county and region well-known for its traffic-clogged roadways, Connolly said it makes sense to bring art to people.

“So, instead of looking at Instagram, you’re actually interacting with real human beings and learning something about art.”

While some might question the importance of art in the politically-driven D.C. community, Connolly doesn’t.

“Art is about creativity, and creativity is important to constantly apply in our lives,” while considering the world as it is, and how it can be improved upon, she said. “For me, art is the tool to promote creativity, and I think it’s very, very important for the happiness and well-being of all of us.”