Coronavirus News: Fairfax Co. votes to increase substitute teacher pay | Is it time to get a COVID-19 booster? Which one? | Local cases of COVID-19 | How many in DC region are vaccinated?
Home » Arlington, VA News » Bobbleheads, shirts and saving… 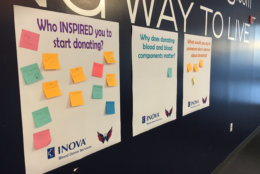 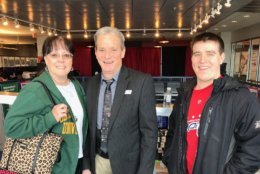 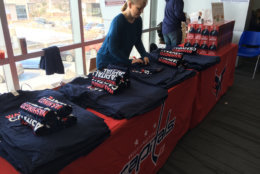 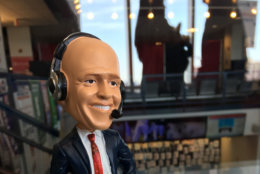 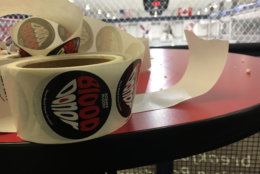 The drive, held at Kettler Capitals Iceplex in Arlington, was one of several sports-themed drives that Inova holds every year, teaming up with local sports teams to promote blood donation in a fun way.

For the Cazenas family, these drives are a bonding tradition.

“The first one we went to was at Nats Park,” said Eddie Cazenas. ” … They gave you a backstage tour and free tickets to a game, and it was a neat event. And we’ve come to every event we can ever since.”

Eddie and Patricia, along with their two sons, Bradley and Jeffery, give blood about three to four times a year. They always come together, and have even recruited others to join them.

“We all used to donate through work or through school, and then it just became easier to do it as a group,” said Patricia.

While the main purpose is saving lives, the sports swag donors walk away with is an extra perk.

“It is an incentive to get us together to do something,” said Patricia. “We’re very much a sports family so it helps.”

At Saturday’s drive, donors received a Capitals shirt and a John Walton bobblehead.

Before leaving for the team’s Sunday game in Pittsburgh, Walton, the radio play-by-play announcer for the team, was at the Iceplex to sign the bobbleheads.

“The event is about saving lives, but it’s about doing it in a fun way,” said Walton, who begrudgingly admitted that his bobblehead looked a lot like him.

“When I first saw it, I didn’t think so. But you’ve got to come to terms with what you look like, and it turns out that that’s what I look like,” Walton laughed.

Getting donors can be tough. Less than 38 percent of the American population is eligible to donate blood, and less than 5 percent donate regularly, according to Julia Ward, Inova’s Marketing Manager.

Inova hoped to collect 500 units of blood at Kettler Saturday.

“It’s easier to come out with other people, so get some people together,” said Bradley Cazenas. “If you can survive a little prick on your finger, it’s not terrible.”