The Arlington County police have released photos of the suspect in a fatal shooting at a house party, and they’re hoping his distinctive tattoo will help the public spot him.
Listen now to WTOP News WTOP.com | Alexa | Google Home | WTOP App | 103.5 FM
(1/2) 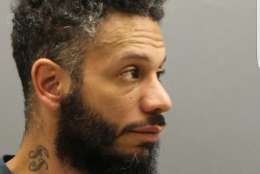 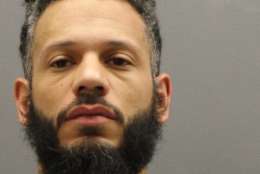 WASHINGTON — The Arlington County police on Monday released photos of the suspect in a fatal shooting at a house party, and they’re hoping his distinctive tattoo will help the public spot him.

Police say Jason Allen Johnson, 37, of D.C., shot and killed Michael Gray, 23, of Manassas, at a house party at around 3 a.m. Sunday. On Monday evening, police released a pair of photos of Johnson that show a tattoo on his neck.

“We’re asking the public to go ahead and take a look at that photo, because it does show a distinctive tattoo that he has on the right side of his neck,” said police spokeswoman Ashley Savage.

Savage said the shooting happened as the result of a dispute at a housewarming party in the 3600 block of North 29th Street that turned physical.

“That ended up spreading outside the home, and that’s when [Johnson] allegedly grabbed the gun and began shooting,” Savage said.

She said police believe Johnson is still in the D.C. area. They’re asking people to keep an eye out for Johnson, but not to approach him — they consider him armed and dangerous.

If you see Johnson, call 911. Crime Solvers (866-411-TIPS) is offering a cash reward for information that leads to an arrest. He’s described as black; 5 feet, 5 inches tall, and around 145 pounds, police said.

Savage said Gray’s death was the second homicide in Arlington of 2017. She added that the house is in what is usually a quiet area.