Many Arlington residents may be surprised to learn that the National Policy Institute, a white nationalist group, has based itself in the area.
Listen now to WTOP News WTOP.com | Alexa | Google Home | WTOP App | 103.5 FM
(1/4) 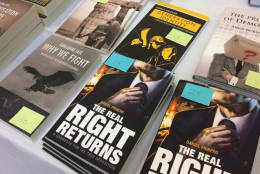 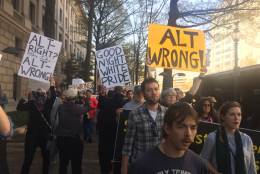 WASHINGTON — This past weekend, a conference of white nationalists met at the Ronald Reagan Building in downtown D.C., just blocks away from the White House. They were brought together by the National Policy Institute, a think tank devoted to racial separation based in Arlington, Virginia.

It’s listed as a hate group by the Southern Poverty Law Center.

The institute’s president, Richard Spencer, is a leading figure in the alt-right movement and clearly espouses a separatist view.

He described the group’s motivating goal: a nation of whites only, excluding minority groups. “It would be about a society that’s for us,” Spencer told WTOP, taking a break from the daylong conference.

“Race is real — race matters. It has tremendous social consequences and race is the foundation of identity,” he said.

Viral video of the group’s Saturday meeting captured some of the attendees giving the Nazi salute, with Spencer saying, “Hail Trump! Hail our people! Hail victory!”

Many Arlington residents may be surprised to learn that a white nationalist group has based itself in the area. But nearly 60 years ago, Arlington was once home to the American Nazi Party, founded by George Lincoln Rockwell.

“We have no standing to tell people who can and can’t be here,” said Libby Garvey, chair of the five-member Arlington County Board.

“I think it’s pretty clear that their mission is completely incompatible with our own vision statement and who we are as a community,” Garvey added, pointing to the county’s vision statement:

“Arlington will be a diverse and inclusive world-class urban community with secure, attractive residential and commercial neighborhoods where people unite to form a caring, learning, participating, sustainable community in which each person is important.”

County board member Jay Fisette was unaware Spencer’s group called Arlington home before he burst onto the news.

“It’s going to make some people definitely feel uncomfortable,” Fisette said, acknowledging that the group has a constitutional right to exist.

“I would be the first one out there — and I think many, many other Arlingtonians — to fight or picket or advocate against their policies and their vision,” Fisette said. “We are proudly a welcoming community here in Arlington.” 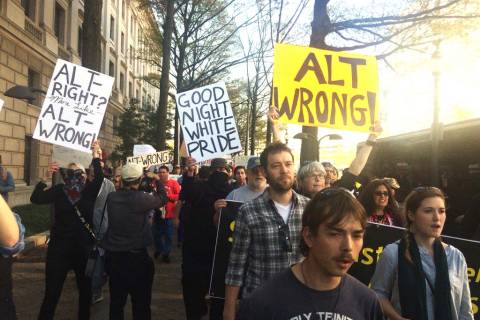 Demonstrators march in protest of alt-right meeting in DC (Photos)