‘It takes a village to rescue a raptor’: Volunteers, firefighters rescue osprey in distress in Annapolis

The U.S. Naval Academy’s “Fighting 46” fire department found themselves rescuing an animal from a tree, but this time it wasn't a cat that was stuck. It was instead a bird of prey in distress.
Listen now to WTOP News WTOP.com | Alexa | Google Home | WTOP App | 103.5 FM
(1/11) 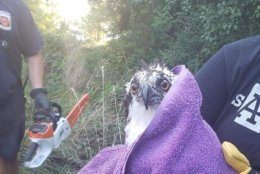 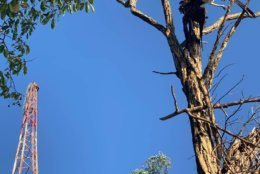 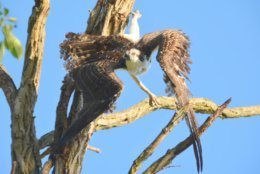 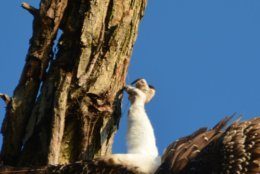 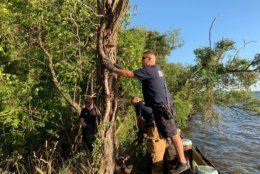 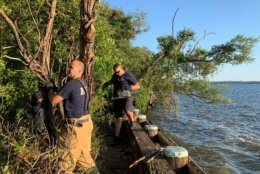 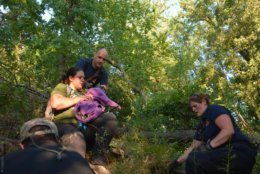 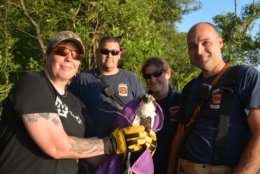 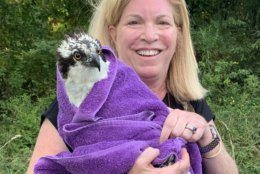 The U.S. Naval Academy’s “Fighting 46” fire department found themselves rescuing an animal from a tree, but this time it wasn’t a cat that was stuck. It was instead a bird of prey in distress.

The department responded to help an osprey that had gotten itself tangled on a tree with fishing wire on Greenbury Point along the Severn River in Maryland’s Anne Arundel County.

It began with a boater posting about the bird on social media Saturday morning which quickly led to someone notifying Nancy McDonald, a volunteer transporter for the Owl Moon Raptor Center in Boyds, Maryland.

McDonald said when she arrived to the area, after a long walk on a trail, she found the bird hanging from its feet 20 feet up in the tree, and it wasn’t moving.

“I was afraid that we had gotten there too late, then all of a sudden it began flapping its wings,” McDonald said.

Knowing they would need some help with the rescue, McDonald called for help from the “Fighting 46” and five firefighters showed up with a chainsaw. A decision was made to cut down the dead tree, but this would be a mission that required precisely cutting the trunk, so the tree would fall on some soft marsh grass, while the bird remained safely on the top of the tree. Once the tree came down as planned McDonald and her helpers moved in to help the bird.

“It had fishing line wrapped around its left talon, we cut the bird free,” McDonald said.

The fledgling osprey, which McDonald said was probably just learning how to fly, was transported to the Owl Moon Raptor Center where it is now being treated for wounds on its legs caused by the fishing line and also some injuries to its wings.

McDonald said that after the osprey has some time to recover, she believes the bird will be OK. The bird’s demeanor, said McDonald, was one sign it will likely recover and thrive.

“This bird, she is full of spirit, full of fight. She was very feisty, very active, very alert,” which McDonald said is good to see in an injured bird.

McDonald said the goal is to rehabilitate the bird. If all goes well, it will be released back to the same area so it can meet up with its parents in time for the birds’ migration to South America later this year.

McDonald said this rescue serves as a reminder for people who boat and fish in the area, to clear their gear and not leave any trash behind.

“That area was rife with discarded fishing line and fish hooks,” McDonald said, adding that volunteers did their best to clean up what they saw.

It took a team of 12 people, including volunteers and firefighters, about two hours to rescue the frightened bird. McDonald said she is thankful that the firefighters, who admitted to her that this bird rescue was a first for them, took the time to help get the bird down.

“It takes a village to rescue a raptor,” McDonald said.