A 4-year-old Maryland boy who suffers a rare metabolic disorder is heading to his favorite game show this year thanks to the work of the Make A Wish foundation.
Listen now to WTOP News WTOP.com | Alexa | Google Home | WTOP App | 103.5 FM

WASHINGTON — Overwhelmed by the cheering as he walked into the Macy’s in Annapolis, Maryland, 4-year-old Nikolas Marinos of nearby Arnold worked to peel off the missing letters and solve the puzzle just like he does on his favorite game show, “Wheel of Fortune.” And then his dad, Marinos, read him the answer: “Nikolas, your wish is coming true.”’

For Nikolas, that meant a trip to go see “Wheel of Fortune” next month, courtesy of the Make-A-Wish Foundation. “Wheel of Fortune has gotten us through a lot of long days,” admits Marinos, whose son was born with a rare metabolic disorder.

“He could not digest any type of protein,” said Jennifer Marinos.

After a liver transplant nearly two years ago, a procedure Jennifer said was the best and also hardest decision she’s ever had to make “to send your child into surgery that large and intense,” she said Nikolas is doing much better, with no more emergency trips to the hospital. 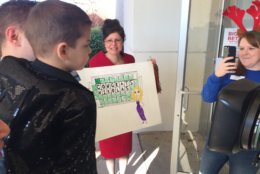 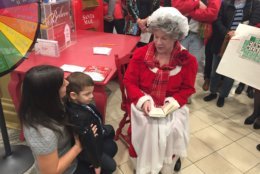 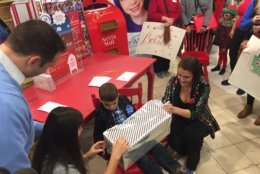 She said those used to happen every month.

“We can breathe now,” she said. “We used to live with bags packed ready to go to the hospital at any time.”

After solving the puzzle, Nikolas got to spin his own wheel, which led to Jenna Wallach, a manager at Macy’s, to reach into her bag and pull out a big toy truck all wrapped up.

Nikolas also helped a magician do some tricks, and Mrs. Claus was on hand to read “The Night Before Christmas.” Then Nikolas and his mom wrote a letter to Santa and dropped it in the mailbox that’s in the store.

“Customers and believers of all ages can come into Macy’s and write a letter [to Santa] and Macy’s makes a donation to Make a Wish. Today your donation is doubled,” she said.

Md. man accused in death of his 85-year-old mother