WASHINGTON — U.S. 50 has reopened in both directions after a significant overnight crash killed two people in Anne Arundel County, Maryland.

Route 50 had been blocked in both directions amid an ongoing police investigation in Annapolis. All lanes had reopened by 7 a.m. on Sunday.

Maryland State Police said in a news release that just before 1 a.m., a Ford Expedition was traveling in the wrong direction on the eastbound lanes of Route 50 at Ridgely Avenue when the driver struck two people — Donald Tyner, 56, and Janell McDougald, 45, both of Baltimore, Md. — on a motorcycle.

Tyner and McDougald were pronounced dead on the scene. The suspect was taken into custody.

#Alert @MDSP investigating fatal crash in which two people on a motorcycle were struck by a Ford Expedition that was traveling WB on EB US-50 at 12:54 a.m. Suspect in custody. Traffic being diverted onto Rowe Blvd at Bestgate Road. More information to follow #MDTraffic https://t.co/q6YnZmduLi

Charges are pending against the unnamed driver of the SUV, and police said a blood test will help determine whether they were under the influence of alcohol at the time of the crash.

As of 7 a.m., there were no significant issues elsewhere on Route 50, including the Chesapeake Bay Bridge. 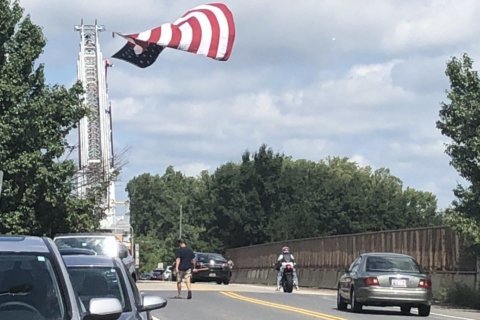