For his birthday, Xiao Qi Ji was given a cake made of ice, fruit juices and other treats. Mother Mei Xiang and father Tian Tian celebrated with cakes as well.
Listen now to WTOP News WTOP.com | Alexa | Google Home | WTOP App | 103.5 FM
(1/5) 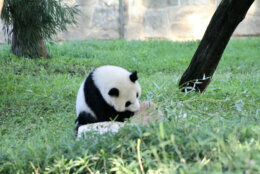 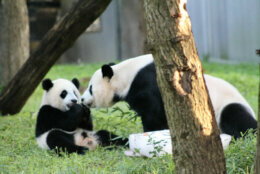 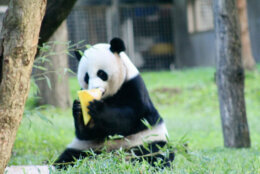 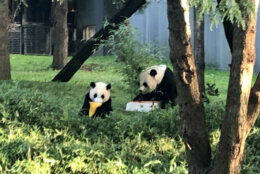 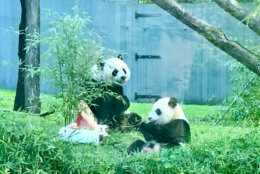 “We’ve been celebrating for the last 365 days quite frankly,” said the zoo’s senior curator Bryan Amaral. “It’s really a great chance to celebrate what happened last year all over again.”

The name Xiao Qi Ji means “little miracle” in English, both because the cub was born in the middle of the coronavirus pandemic and because his mother Mei Xiang was 22-years-old at the time, which meant she had a less than 1% chance of giving birth to another cub.

“It was really neat the way he came into the world,” Amaral said. “Even in the best of circumstances pandas are not easy to breed.”

For his birthday, Xiao Qi Ji was given a cake made of ice, fruit juices and other treats. His mother Mei Xiang and father Tian Tian were given cakes to celebrate too.

As part of the zoo’s cooperative breeding agreement with the China Wildlife Conservation Association, all cubs born at the zoo move to China when they are 4 years old. Tai Shan, Bao Bao, and Bei Bei were respectively moved in 2010, 2017 and 2019.

Mei Xiang and Tian Tian have lived at the National Zoo since Dec. 6, 2000.

It is estimated that there are over 1,800 giant pandas in the wild in China.

“These individuals live in scattered populations in central China, mostly in Sichuan Province, but also in Gansu and Shaanxi provinces,” the National Zoo said on its website. “Chinese scientists are working to reintroduce giant pandas to the wild.”

The estimated life span is between 15 and 20 years for wild pandas and about 30 years for those under the care of humans.