At the time, officials insisted that while the Warrior Canine Connection program had been suspended, dogs would still be part of the healing process at Walter Reed.

And a walk down the halls of the facility shows dogs are still on duty, generating smiles from everyone passing by as they head to patient bedsides where they offer comfort and empathy.

The Labrador and golden retrievers are part of a 10-year program at Walter Reed and are referred to as “facility dogs.” Unlike Warrior Canine Connection, which places service dogs with veterans on a permanent basis, the facility dogs play a different role, according to officials there. 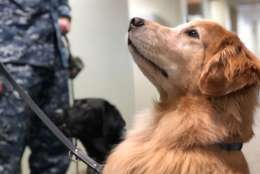 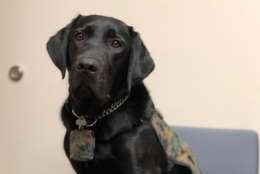 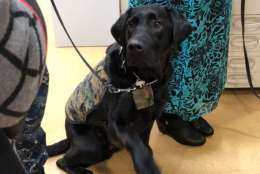 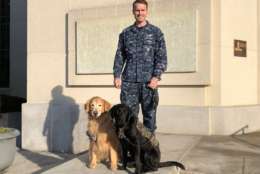 “These are not service dogs,” said Amy O’Connor, a social worker and director of training for the facility dogs at Walter Reed.

She explained that the dogs have all had formal service training, some as guide dogs, some as PTSD dogs, and at Walter Reed, they serve a different function. They provide what O’Connor said is “canine-assisted therapy” and are trained to work with a variety of handlers who take them to various units as assigned.

Currently, there are six dogs and 15 handlers in the facility dog program, which got its start 10 years ago. O’Connor explained that she was working with a family, with three young children who were ages 5, 7 and 12. Their father was dying, and O’Connor said she was struggling to help them through such a profoundly difficult time.

Then, she hit on the idea of introducing a dog to the children’s visits.

That’s where Patty Barry, then an executive assistant at Walter Reed, and her dog Laura Lee came in. Barry had a golden retriever, and O’Connor thought she’d introduce the dog as a way of giving the family — especially the kids — a little comfort in the form of a friendly, furry face.

O’Connor said she kept the visit brief, but the impact was obvious. “For 10 minutes, those kids didn’t have to think about their dad dying.”

Instead, she said, they had a happy, goofy new friend. “They also had something to talk to their aunt and uncle that night, on the phone,” something other than grim, medical news.

“It didn’t change the outcome,” O’Connor added, “but it changed their experience.”

From that point on, O’Connor said she was hooked. Dogs were going to become a fixture in her work at the sprawling Walter Reed facility.

Barry, now the coordinator for the facility dog program at Walter Reed, said each dog has a particular set of talents.

Dillon, a young black Labrador retriever, is described as “task-oriented.” He’s the dog who can tote a basket of bottled water to kids on a unit or play a game of “bowling” to entertain patients. Goldie — as the name suggests, a golden retriever — is “the social butterfly,” Barry said, that flits from one visitor to the next, eager to meet a new best friend.

Laura Lee, another golden retriever, is often described in ways that make it clear she’s the empathizer-in-chief. “She seems to detect stress,” Barry said, adding that it was impossible to take Laura Lee past the emergency room without stopping. She said the dog would often pick out a person and sit quietly near them.

“And the stories you would hear from the people would be amazing.”

Barry said that people waiting on loved ones would stroke Laura Lee’s golden fur, letting their cares and worries tumble out. Over and over again, Barry said people would ask how Laura Lee could sense their distress.

Hospital Corpsman 1st Class Robert Park, a procurement analyst for the Navy’s Health Care Professional Scholarship Program, manages the handlers that take the dogs on their visits throughout the facility. Like O’Connor and Barry, he’s passionate about the positive impact of the program.

“I saw the impact it had on patients,” he said. When asked to describe the reaction the dogs get when they’re first brought into a room, he mimicked the high-pitched squeals of joy from both patients and their family members.

“Every time I’ve brought a dog into a patient’s room, there’s always a thank you,” he said. 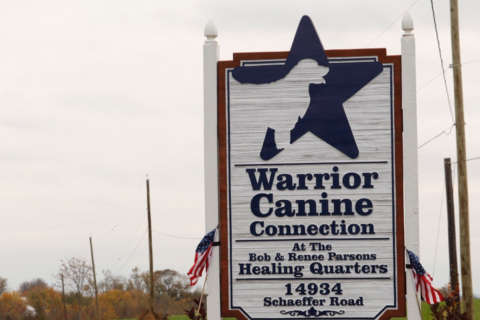 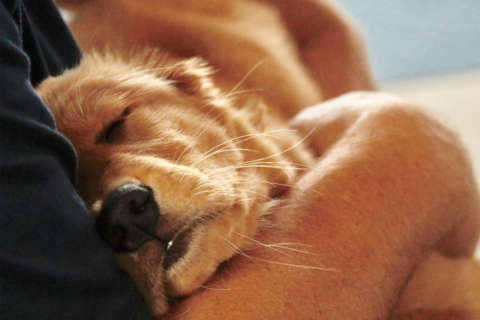 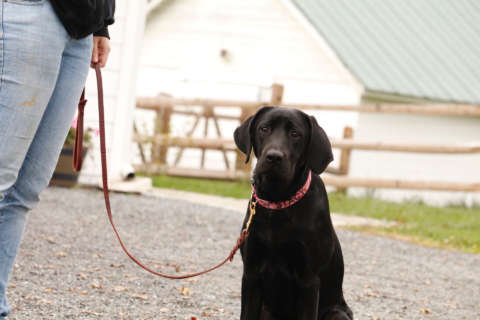