Starting on Jan. 1, 2019, Jefferson Davis Highway could be erased from the map in Alexandria now that the city manager has recommended a new name for U.S. Route 1 in the city.
Listen now to WTOP News WTOP.com | Alexa | Google Home | WTOP App | 103.5 FM

WASHINGTON — Jefferson Davis Highway could be erased from the map in Alexandria on Jan. 1.

City Manager Mark Jinks has recommended replacing the name of U.S. Route 1 in the Potomac Yard area  with the name Richmond Highway beginning on Jan. 1, 2019.

A recommendation from Jinks to be taken up by the city council Tuesday would set a public hearing on the name change June 23.

After the public hearing, Alexandria would change the name of the road on Jan. 1, 2019.

If the name change is approved, Alexandria would replace 10 basic street signs, one large street sign and nine illuminated street signs at an expected cost of $27,150.

Updates to maps and public records would be made incrementally.

“A change in street name will primarily impact residents and businesses on Jefferson Davis Highway, who will likely need to replace stationary and marketing materials, update vendors with new contact information, and in some cases, replace signage,” a fiscal impact statement said.

Address numbers would not change and property owners would not need to update deeds since they are based on legal descriptions.

An advisory group set up by the city recommended in 2016 that Alexandria change the name of Jefferson Davis Highway, leave the Confederate Appomattox statue in place on South Washington Street and consider any other changes to the names of streets linked to Confederate figures on a case-by-case basis.

The city council then voted in favor of a name change, which led to a separate advisory panel set up last year with two members each from Alexandria and Arlington that was solely focused on a new name for Jefferson Davis Highway.

That group recommended changing the name to Richmond Highway. Other suggestions included  Abraham Lincoln, Alexandria-Arlington, Barack Obama, Heather Heyer, Mildred and Richard Loving, Patrick Henry or having no name at all besides U.S. Route 1.

“The members agreed that the street should not be named for an individual person, since public sentiment about any individual may change over time,” a discussion of the recommendation provided to the city council said.

Jinks is now backing the recommendation for the name Richmond Highway after an additional review by Alexandria and Arlington staff found the change would be feasible.

“Using the same name in Alexandria, Fairfax County and potentially Arlington is not expected to be a significant change with regard to public safety,” the memo to the city council said.

“Using the same Richmond Highway name for contiguous stretches of road would be more understandable to motorists in terms of navigation and wayfinding. This is especially important in this instance as Jefferson Davis Highway is connected to two heavily traveled Interstate highways (I-66 and I-395),” the memo continued.

While Arlington and Alexandria are cooperating on the potential change, only Alexandria has the legal authority to do it.

A bill that would have given counties similar street naming powers to those that cities already have failed this year in Richmond.

Opponents of the bill said they wanted to protect names honoring leaders and supporters of the Confederacy.

Alexandria’s advisory panels did not recommend changing the name of the portions of Route 1 in the city that are named Patrick Street and Henry Street, and rejected proposals to rename the Jefferson Davis Highway portion Patrick Henry due to concerns about replacing the name of one slaveholder with another.

The Jan. 1 name change would apply only in Alexandria.

Route 1 has at least 19 different names in Virginia with at least 23 locations where it changes from one name to another, the city said.

Jefferson Davis’ name would remain on the highway elsewhere.

While cities, counties and towns can all name smaller streets, roads and alleys, cities have some additional authority to name certain major roads.

In other areas, the Commonwealth Transportation Board generally has the power to name primary roads and highways the General Assembly has not specifically named by law.

Renaming of Jefferson Davis Highway moving along in Alexandria 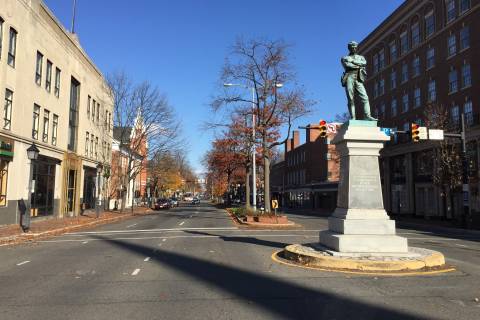