Residents in Alexandria's Del Ray neighborhood tried to continue their normal routines Thursday working around the crime scene that’s closed roads and businesses near the park where seven people were shot or hurt and that now represents how the nation's policies and politics have failed.
Listen now to WTOP News WTOP.com | Alexa | Google Home | WTOP App | 103.5 FM

ALEXANDRIA, Va. – As police and federal investigators continue to learn more about the shooting that critically wounded two people, including Rep. Steve Scalise, and injured four others, residents in the Del Ray neighborhood tried to continue their normal routines while around the crime scene that’s closed roads and businesses on Thursday.

Crime scene tape blocked off the immediate area around Eugene Simpson Stadium Park and East Monroe Avenue the day after the gunfight with police. Virginia State Police stood guard at each barrier to prevent people from wandering into the secured area.

“I normally take a couple of classes at the (YMCA) on Thursday mornings. And that’s what I was walking in to do – naively,” said Kathryn Kellam, while carrying a yoga mat, having just been denied entry by a state trooper.

“He stopped me and said ‘It’s not happening today, the Y is closed’.”

It’s a job that trooper has had to do all day, fielding questions about what is accessible and what isn’t, all while saying ‘hi’ to kids passing by and petting dogs that are tethered to their confused owners.

The Alexandria YMCA and several stores on East Monroe Avenue, including Aldi and CVS, are closed while police and the FBI investigate the shooting.

“We can work around things like that,” Kellam added. “This is obviously a very serious situation.”

For people who live in the area, the road closures provide just another reminder about the shocking shooting that happened just blocks from their homes.

“It’s very unsettling,” Duber Winters told WTOP, with his 9-month-old puppy, Betty, at his side.

“Yesterday morning, we were at the ball field and we were 20 feet from that third base dugout 20 minutes before it all happened. This morning, when we take our walk, we’re unsettled – I would say is the word – and just kind of cautious.”

He mourned the loss of community that the park provided for the neighborhood.

Others were trying to retrieve belongings left behind amid the mayhem.

“Of course, it is just an inconvenience; it’s something you can live with as opposed to what happened to the people that were deeply affected,” James Smith said while walking up Mount Vernon Avenue.

He was inside the YMCA when the shooting happened.

“I got to the Y at about 6:30 in the morning,” Smith recalled. “I was on one of the elliptical trainers at about 7:15, somebody from the YMCA staff came in and said ‘You’ve got to go downstairs. Shots have been fired.’ There were a couple bullet holes in the outer glass of the Y.”

Smith was held inside the center for a few hours.

Now, he’s trying to get his car – and everything that’s inside it – back from the YMCA parking lot. It’s not a big deal to him, especially with the grand scope of all that had happened in the past day.

“I have a second car, but the keys to the second car are on that keychain so I couldn’t drive that and I didn’t really want to drive anywhere with no ID,” Smith explained. “I think the police officers might give me a break, but my money is in there. That’s just the way it is.”

“We’ve got people today who think they can solve problems with guns and bullets, so that’s a really sad thing for the neighborhood,” Kellam said.

“It’s a sad state of affairs when we turn into a third-world country – an assassin trying to assassinate our political leaders either on the right or the left,” Smith said. “We can have disagreements – and of course you’re not going to get 100 percent agreement on anything – but it’s a sad state. I think the political climate – not just for this year, but for many years — has been fostering this. It’s just a big pot just stirring. Sometime it boils over with some people and it just boils over where – I don’t know what this guy was thinking about.”

“They should be able to play baseball or softball anywhere they want,” proclaimed Winters. “It’s just crazy.” 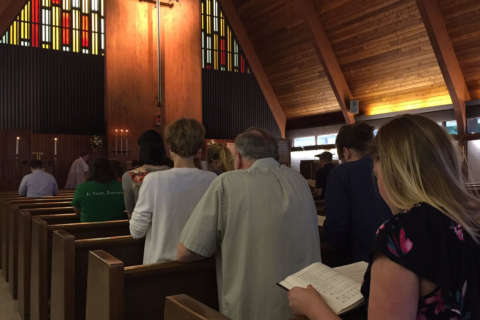