WASHINGTON — One of the first three Alexandria police officers to respond to a Del Ray baseball field last week where a gunman had opened fire on members of Congress faced such a heavy barrage of gunfire as she advanced toward the shooter, she was pinned to the ground and unable to pull out her weapon and fire.

But that ended up playing a key role in bringing the shooter down, Alexandria’s police chief, Mike Brown, told reporters Monday.

“It’s my belief and the belief of many others that because she was under fire, the focus on her allowed the other officers to get into position to take care of the suspect,” Brown said during a news conference at which he praised the actions of Officer Nicole Battaglia and her two colleagues, Alexander Jensen and Kevin Jobe in responding to the chaotic scene.

Shortly after 7 a.m. June 14, Hodgkinson opened fire on the baseball field at Eugene Simpson Park where Republicans lawmakers were practicing for an upcoming charity game injuring House GOP Whip Steve Scalise, of Louisiana, a lobbyist for Tyson Foods and a congressional aide.

“You can’t teach the kind of courage and instinct that I saw from the three officers … that comes from within,” Brown said. “That comes when somebody pins on the badge and they decide that they want to be a public servant and a cop.”

None of the Alexandria officers was injured in the gunfight with Hodgkinson.

“They’re good officers; they’re strong officers,” Brown said. “They made a really good decision, and I’m damn proud of them.”

Brown and other city officials praised the work of all the first responders who worked to treat the wounded, secure the scene and process evidence.

The shooter, Hodgkinson, had been living out of his van in the Alexandria area for the past two months and reportedly had a history of railing against the Republican party and policies, authorities said. When asked Monday if the department had any contact with him before last week’s shooting, Brown declined specifics saying “nothing jumps immediately to mind,” and stressing the investigation is still ongoing.

Scalise, who shot in the hip, was at “imminent risk” of death when he first arrived at D.C.’s MedStar Washington Hospital after the shooting, the hospital’s chief of trauma said last week. After a series of surgeries, Scalise’s condition improved over the weekend from critical to serious. 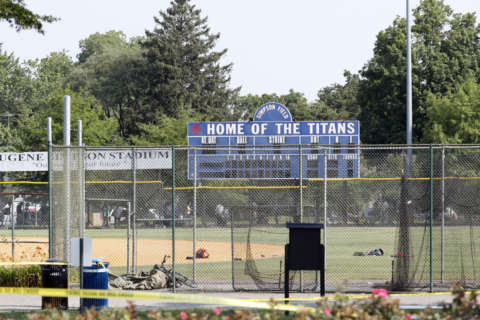