NAIROBI, Kenya (AP) — Ethiopia said Thursday it is kicking out seven United Nations officials whom it accused of “meddling” in the country’s internal affairs, as pressure grows on the government over its deadly blockade of the Tigray region.

The expulsions are the government’s most dramatic move yet to restrict humanitarian access to the region of 6 million people after nearly a year of war. The U.N. has become increasingly outspoken as the flow of medical supplies, food and fuel has been brought to a near-halt.

U.N. Secretary-General Antonio Guterres said he was “shocked” by the announcement and expressed “full confidence” in U.N. staff, saying they are guided by impartiality and neutrality. In a statement, he said the U.N. is engaging with Ethiopia’s government “in the expectation that the concerned U.N. staff will be allowed to continue their important work.”

Ethiopia’s government has accused humanitarian workers of supporting the Tigray forces who have been fighting its soldiers and allied forces since November. Aid workers have denied it. Thousands of people have died in the conflict marked by gang rapes, mass expulsions and the destruction of health centers, with witnesses often blaming Ethiopian soldiers and those of neighboring Eritrea.

The U.N.’s humanitarian chief, Martin Griffiths, this week told The Associated Press that the crisis in Ethiopia is a “stain on our conscience” as children and others starve to death in Tigray under what the U.N. calls a de facto government blockade. Just 10% of needed humanitarian supplies have been reaching Tigray in recent weeks, he said.

The remarks were one of the sharpest criticisms so far of the world’s worst hunger crisis in a decade, with some 400,000 people facing famine conditions. Memories of the 1980s famine in Ethiopia, which killed around 1 million people and produced images that shocked the world, are vivid in his mind, Griffiths said, “and we fervently hope (this) is not happening at present.”

The AP, citing witness accounts and internal documents, last week reported the first starvation deaths since Ethiopia’s government imposed the blockade in June in an attempt to keep support from reaching Tigray forces.

A statement from Ethiopia’s foreign ministry said the seven U.N. officials must leave the country within 72 hours. Foreign Affairs Ministry spokesman Dina Mufti didn’t respond to a request for details of their alleged interference.

The U.S. condemned the expulsions, with White House press secretary Jen Psaki agreeing that Ethiopia’s crisis is “a stain on our collective conscience” that must stop.

“Depriving your own citizens of the basic means of survival is unacceptable,” she said, and warned that Washington could impose financial sanctions “on those who obstruct humanitarian assistance to the people of Ethiopia.”

Asked why the Biden administration isn’t taking action now, Psaki responded that “absent clear and concrete changes, we will.” She added that the White House is looking to see “meaningful steps” within weeks toward a negotiated ceasefire.

“On September 17, President Biden issued an Executive Order establishing a new sanctions regime that authorizes the imposition of targeted economic sanctions in connection with the crisis in northern Ethiopia,” U.S. Secretary of State Antony Blinken said in a statement Thursday. “We will not hesitate to use this authority or other tools to respond to those who obstruct humanitarian assistance to the people of Ethiopia.”

The people expelled include five with the U.N. humanitarian agency, including deputy coordinator Grant Leaity, one from the U.N. human rights office and the one UNICEF representative in the country, Adele Khodr. A spokesperson for the U.N. Office for the Coordination of Humanitarian Affairs and some of the individuals expelled didn’t immediately comment.

Findings from a joint investigation into the war by the U.N. human rights office and the government-created Ethiopian Human Rights Commission — a rare setup that has drawn concern and criticism — are scheduled for release on Nov. 1. It wasn’t immediately clear if the probe will be affected by the expulsion of a U.N. member of the joint team, Sonny Onyegbula.

The expulsions come as the U.N. also responds to the war’s spread into Ethiopia’s neighboring Amhara and Afar regions, with hundreds of thousands of people displaced. “What is chilling and revealing about the U.N. officials’ expulsion is that it comes when the U.N. and other aid agencies are needed most in most parts of Ethiopia,” tweeted Mehari Taddele Maru, a professor of governance at the European University Institute.

Earlier, Ethiopia’s government suspended the operations of two major international aid groups — Doctors Without Borders and the Norwegian Refugee Committee — accusing them of spreading “misinformation” about the war.

The government is so wary that humanitarian workers boarding rare flights to Tigray have been told they couldn’t bring such items as can openers, multivitamins and medicine, even personal ones, as well as the means to document the crisis, including hard drives and flash drives.

Griffiths told the AP he too was searched, with authorities examining everything in his bag and questioning why he was carrying earphones.

For months, humanitarian workers have been increasingly hesitant to speak openly about the government’s blockade of Tigray for fear of losing access to the region. But the lack of fuel and other supplies has left many without the means to help as some people starve.

“They’ve got their fists around our throats with white knuckles strangling us,” one humanitarian worker told the AP this week on condition of anonymity for fear of retaliation. “They just let us gasp from time to time so we don’t die.” 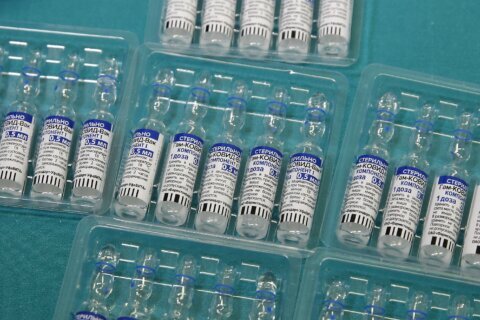 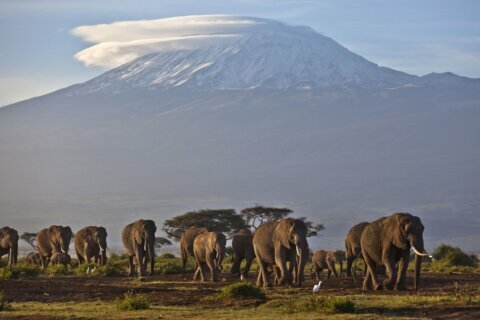