ROME (AP) — A Bidoon poet and activist who holds U.S. citizenship said Tuesday that Kuwait was deporting her against her will after she traveled to the oil-rich nation to visit her family.

Mona Kareem, 35, told The Associated Press that she had been at Kuwait International Airport for hours after facing interrogation following her arrival on a flight from Beirut. She comes from Kuwait’s so-called Bidoon community, which is largely made up of descendants of desert nomads considered stateless by the government.

Kareem described herself as being exiled from Kuwait since 2011 after leaving on a scholarship abroad with temporary travel documents. She later obtained U.S. citizenship and a passport while earning a doctorate in comparative literature at the State University of New York at Binghamton.

She said she was able to travel to Kuwait with her U.S. passport this past summer to visit her six siblings and parents who still live there. Americans can receive visas on arrival to Kuwait, an autocratic nation run by a ruling emir that’s slightly smaller than the U.S. state of New Jersey and is one of the world’s top oil producers.

Kuwait’s Information Ministry did not respond to a request for comment.

Kareem said she earlier pledged not to engage in any political discussions after facing questions about her activism and the Bidoon. The Bidoon have long protested against the government depriving them of citizenship and rights. Bidoon is an Arabic word meaning “without.”

Kareem had run a website regarding Bidoon issues and previously spoke out publicly over their treatment in Kuwait.

“This is such an extreme measure,” Kareem told the AP. “This doesn’t happen to U.S. citizens.”

Kareem said authorities told her to board a flight Tuesday night back to Beirut or she could face imprisonment. She later told the AP that she spoke to a U.S. Embassy official and decided to fly back to Beirut.

The State Department did not respond to a request for comment. 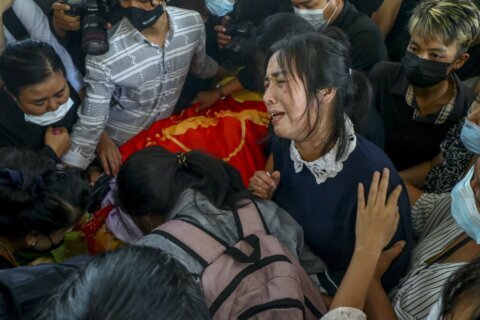 How Myanmar is faring 2 years after army ousted Suu Kyi