Djokovic worried about leg, bothered by heckler in Australia

MELBOURNE, Australia (AP) — Novak Djokovic propped up his left shoe on a courtside sign so he could stretch out a hamstring that he acknowledged afterward concerns him. He grimaced while flexing the muscle after one point, hopped on his right leg to keep weight off the left after another. He took a medical timeout while a trainer re-taped him during the second set — which Djokovic would go on to drop.

As if he needed another distraction, Djokovic was flustered enough by a heckler that he asked chair umpire Fergus Murphy to have the spectator removed from Rod Laver Arena, telling the official: “The guy’s drunk out of his mind. … He’s been provoking. He just wants to get in my head.”

As Djokovic summed up afterward: “It was a lot happening tonight.”

Here’s what did not happen Thursday evening at the Australian Open: Djokovic did not lose his way entirely and, most importantly, he did not lose in the second round, which is what happened to both No. 1 seed Rafael Nadal and No. 2 seed Casper Ruud.

Seeking a 10th trophy at Melbourne Park, to add to his own record, and a 22nd Grand Slam title overall, to equal Nadal’s, Djokovic put everything aside and beat 191st-ranked French qualifier Enzo Couacaud 6-1, 6-7 (5), 6-2, 6-0. It was Djokovic’s 23rd consecutive win at the Australian Open, a streak that paused a year ago when he couldn’t play in the tournament because he was not vaccinated against COVID-19.

“I am worried. I mean, I cannot say that I’m not. I have reason to be worried,” Djokovic said about the hamstring, noting that he needs to avoid practicing on days before matches.

“There’s not much more to talk about,” Djokovic said. “There’s two choices: Leave it or keep going. So I’m going to keep going.”

A group of people dressed in red-and-white striped shirts straight out of “Where’s Waldo?” left the arena after Djokovic pleaded his case with Murphy about one of them giving him a particularly hard time.

“What I have a problem with is when somebody’s crossing the line, numerous times … and saying things that were not respectful at all,” Djokovic explained at his news conference, adding that it had been going on for more than 1 1/2 hours. “I had enough, you know?”

This did not shape up as a contest of much intrigue, given that the fourth-seeded Djokovic has done all that he has done, while Couacaud entered with a career mark of 2-5. And whatever Couacaud’s chances were beforehand seemed to dim just four games in, when he turned his right ankle and required a visit from a trainer.

But Couacaud overcame that and played freely, conjuring some terrific shotmaking.

“You just have to deal with it. One of those circumstances and situations where things are maybe not going perfectly your way,” Djokovic said. “But that’s sport.”

He was speaking about how his foe was playing, yet the sentiment captured the night well.

There was a bit of Djokovic’s usual interplay with the crowd when he got his game in order. After breaking to lead 2-0 in the last set, he jogged around his side of the court, as if to show his opponent, and everyone else, just how well he was feeling and just how well he was playing.

At another moment, he basked in roars of approval by pointing his index finger to his right ear, asking for more.

Couacaud managed to have some fun, too, when he briefly made things a bit interesting, celebrating his claim of the second set by pointing to the court as if to indicate, “This is my house!”

Which, of course, it is not. The place belongs to Djokovic, who will play No. 27 Grigor Dimitrov next, and knows that two highly ranked contenders are no longer possible obstacles. 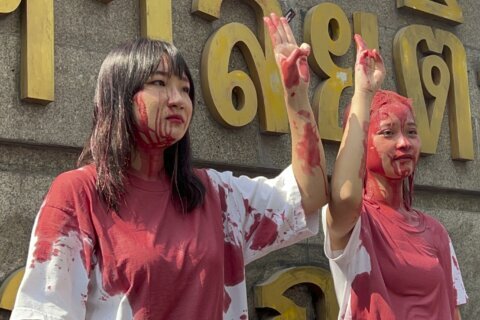