WASHINGTON (AP) — The Treasury Department announced sanctions Tuesday against a weapons trafficking network affiliated with the Islamic State group in Somalia and the al-Qaida-linked al-Shabab extremist group, which are accused of carrying out deadly terrorist acts on civilians including car bombings.

The move to freeze and block any potential transactions with U.S. entities comes after two car bombings at a busy junction in Somalia’s capital on Saturday killed at least 120 people.

Al-Shabab, which often targets the capital, Mogadishu, and controls large parts of the country, claimed responsibility for the attack, saying its objective was to hit the education ministry.

These are the first sanctions on Somalia’s Islamic State group network from Treasury’s Office of Foreign Assets Control. The State Department designated IS-Somalia in 2018 as “Specially Designated Global Terrorists.”

White House National Security Council spokesman John Kirby on Tuesday said the sanctions were intended to underscore the administration’s commitment to helping Somalia in its fight against terrorism.

He said the Treasury Department sanctions “aimed to expose and disrupt a broad network of weapons traffickers, their associates and an affiliated business operating primarily between Yemen and Somalia.”

On Oct. 17, the U.S. imposed financial penalties on more than a dozen people from Somalia and Yemen who it said were involved in al-Shabab’s financing operations. Those funds are used to help with weapons procurement and recruitment activities.

Violent acts have increased in recent months. Islamic extremist fighters in early October targeted a Somali government headquarters in the Hiran region, leaving at least 20 people dead and 36 wounded in a town at the center of a recent mobilization against the extremists.

Saturday’s bombing in Mogadishu injured more than 320 people, and some were still missing.

“We extend our heartfelt condolences to all who lost loved ones and were injured in Saturday’s horrific attack and strongly condemn this indefensible act of terrorism,” Treasury Undersecretary Brian Nelson said. “Today, we take direct aim at the networks funding and supplying both ISIS-Somalia and al-Shabaab that support their violent acts.”

ISIS-Somalia is a far smaller operation than al-Shabab, with members numbering in the hundreds as opposed to several thousand at least for al-Shabab. Both engage in extortion and have competed for business, even killing members of the other group at times. The sanctions announcement gives insight into links between the groups.

The weapons networks targeted by the sanctions “operate primarily between Yemen and Somalia and have strong ties to al-Qaida in the Arabian Peninsula and al-Shabab,” the Treasury Department said. But one person sanctioned, Osama Abdelmongy Abdalla Bakr, went as far as to pursue contacts with North Korean officials in search of weapons and support, it said.

“ISIS did not receive lightweight weapons, anti-drone technology, or anything else from the DPRK,” also known as the Democratic People’s Republic of Korea, Treasury said.

The announcement also gives a glimpse into smuggling operations. One sanctioned ISIS-Somalia member, Abdirahman Mohamed Omar, takes AK-47 assault rifles and machine guns out of nearby Yemen and hides them under ice and fish, and in Somalia the weapons are hidden in sugar and rice sacks and loaded onto camels for delivery to al-Shabab and ISIS-Somalia, the announcement said. 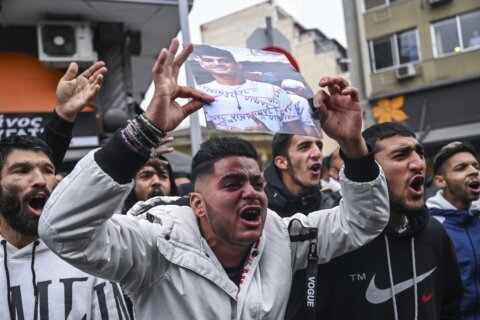