One year into the COVID-19 pandemic, the world has seen death, economic hardship and anxiety on an unprecedented scale. But it has also witnessed self-sacrifice, courage and perseverance.
Listen now to WTOP News WTOP.com | Alexa | Google Home | WTOP App | 103.5 FM
(1/14) 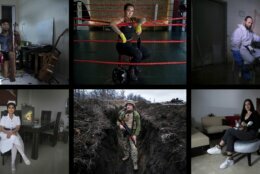 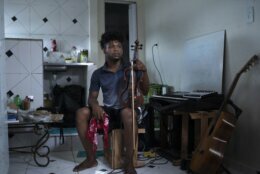 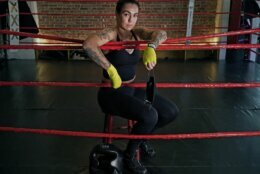 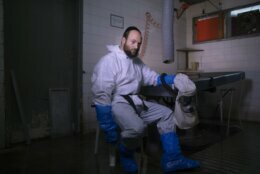 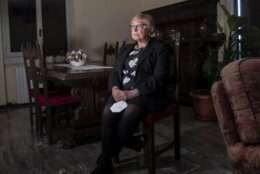 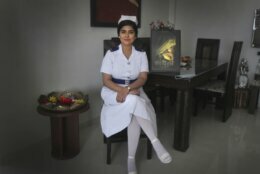 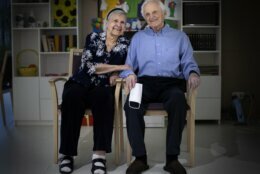 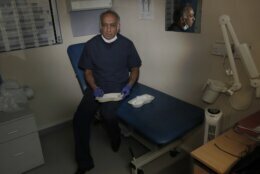 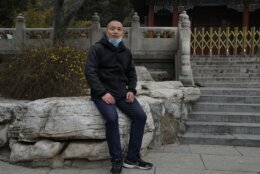 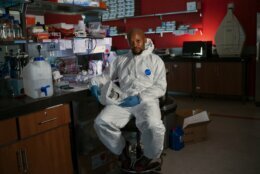 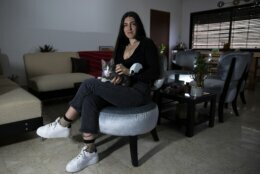 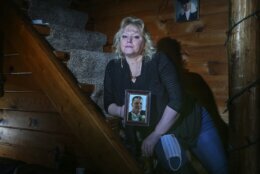 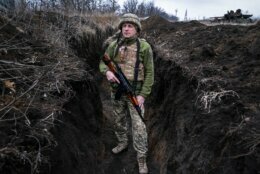 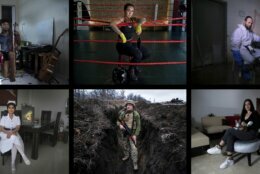 One year into the COVID-19 pandemic, the world has seen death, economic hardship and anxiety on an unprecedented scale. But it has also witnessed self-sacrifice, courage and perseverance.

In India, Brazil, South Africa and other places around the globe, people are helping others and reinventing themselves.

“I’ve been adaptable, like water,” said a woman whose dream of becoming a U.S. boxing champion was dealt a blow by the crisis, though not necessarily a knockout punch.

Their voices and images can inspire, even though the future is as uncertain for them as it is for everyone else.

Mauricio Vivet’s talent as a violinist had earned him a route out of a slum in Rio de Janeiro. As a teen, he played classical music in the streets for money. He got noticed and received a scholarship to a prestigious music school.

After graduation, Vivet earned a living by playing at events and giving lessons. He moved out of the neighborhood and planned to open a music studio.

COVID-19 put a stop to all that. Concerts, weddings and other events were canceled. Vivet, 27, now struggles just to pay for food. He left his apartment and moved back to his mother’s house in the favela.

Vivet’s biggest fear is not having money to provide for his 4-year-old son, Angelo.

Vivet has gone back to square one.

On a recent day, he carefully wrapped his violin in a red cloth, placed it inside a battered black suitcase and made his way to Ipanema Beach. There, he sat on a stone bench and played his violin, the sweet notes amplified by a speaker. Passersby stopped to listen. Some dropped money into the red cloth.

“It is the only stage that I have, the only thing that they have not prohibited,” Vivet said. “It’s the only way I can make money.”

On a recent day, Melody “Mel” Popravak was in a boxing gym in New York City, her arms tattooed, her hands wrapped in yellow tape. Three years ago, she started boxing and was a finalist in two national tournaments.

After the shutdown, she trained in a friend’s garage.

“I’m determined not to give up and to continue to move on to be a professional boxer,” the 35-year-old said.

She has also started an online personal training company where she gives tips on staying in shape.

“I’m checking in with people all over the country who are going through various situations related to COVID,” she said. “I think I’ve been staying strong. I’ve been adaptable, like water, melding into the situation.”

Yehuda Erlich, a worker with Israel’s official Jewish burial society, remembers the first signs that coronavirus had arrived: empty streets and deathly silence. Then a surge of deaths overwhelmed his morgue, with bodies placed in the corridor.

“I really hope we are nearing the end,” Erlich said of the pandemic.

Near the beginning of the pandemic, Gabriella Formenti, a doctor from the village of Tavernola Bergamasca in northern Italy, started feeling exhausted and had a high fever. Hit by the virus, she wound up intubated in an intensive care unit.

Eventually she woke up but could move only her head, having lost muscle mass. Today, Formenti undergoes rehabilitation and is often out of breath and weak. Forced by her condition to retire, she greatly misses her patients.

“This disease emphasized, even more, how close they are to me emotionally and personally,” she said. “They even celebrated when I came back home. They all came to see me and helped me. ”

Shikha Malhotra is a Bollywood actress whose Instagram feed highlights her film and TV projects. During the pandemic, they have also featured her as a nurse.

It is a real-life role that Malhotra, who has a nursing degree, has taken on while volunteering at a crowded Mumbai hospital. Mumbai was one of the worst-hit cities in India, the country with the second-highest caseload of COVID-19 in the world.

“I am first a nursing officer, then an actress,” Malhotra said at her home, wearing a white nurse’s uniform, a white cap over her luxuriant black hair. Next to her was a poster of a movie she starred in.

After working in a COVID-19 ward for months, she became infected, spent a month alone in the hospital recovering, then suffered a stroke that paralyzed the right side of her body.

“It was a big setback for me,” the 25-year-old said, tears streaming down her face as she recalled believing that she would never walk again. She recovered and plans to continue her acting career while also staying ready to serve as a nurse whenever she is needed.

“Seeing life and death in the hospital changed me,” Malhotra said. “I became a more mature person, more grounded. Seeing the people in pain, every single second now I thank God for all that I have.”

At 101, Boris Novikov is one of the oldest survivors of COVID-19 in Russia.

A decorated World War II veteran, Novikov was hospitalized with oxygen support. Now recovered, he celebrated his birthday last week at a senior care center near Moscow, where he lives with his wife, Yelena, 93. They have been together 70 years.

“We can’t complain about anything, for now at least,” his wife added. “We’re living it day by day.”

Dr. Anil Mehta has been going with his small team of physicians and nurses to homeless centers in London to offer free COVID-19 vaccinations. The team has vaccinated hundreds of people.

“It makes sense to focus energy on groups that are underrepresented and those most reluctant to go to their doctors,” he said.

Mehta is driven by a desire to help everyone get back to normal as quickly as possible.

“Our lives have been turned upside down in the past year,” he said. “This is the most important thing any of us doctors have done in our lives.”

Shi Jinjie, a tour guide in Beijing, saw a 90% drop in business last year because of the pandemic. But he is confident domestic tourism will make a comeback very soon.

Already, a few customers are trickling in. He showed them around a park featuring centuries-old pavilions.

“Is Jingshan beautiful?” he asked them. As he took their photo, they responded: “Beautiful!”

Sandile Cele was pursuing a doctorate at the University of Kwazulu-Natal in South Africa when the pandemic hit, creating an obvious research topic.

He made a splash when he figured out how to grow the South African variant of the coronavirus in the laboratory. That enabled the lab to test it and discover that people previously infected with COVID-19 don’t produce antibodies against the mutant version, which has spread to numerous countries.

Cele, 33, said it is every graduate student’s dream “to have a project for your Ph.D. that’s going to have so much impact in the world.”

On Aug. 4, Angelique Sabounjian was at a coffee shop in Beirut when a thunderous explosion at a warehouse containing a chemical commonly used as fertilizer rocked the city, blowing out windows and cutting Sabounjian’s face. She bled profusely.

On that day, she also became infected with the coronavirus.

“Catching corona and being in that isolation really helped me realize I was crying all day, every day, and I think I needed that,” she said. “I needed to have that release in some way.”

Cynthia Archambault, of Woonsocket, Rhode Island, lost her brother Daniel Remillard and her father, Ronald Remillard, to COVID-19 within an hour of each other.

“It’s left a really big gaping hole in all of our hearts,” she said.

In a front-line trench, the soldier in eastern Ukraine faces two enemies: the Russian-backed separatist rebels and the coronavirus that threatens to infiltrate the ranks.

“We are used to living with dangers,” said the soldier, who asked to be identified only by his call sign, Kram. “The pandemic has become another stress for me.”