The traditional day of service is on the holiday, Monday, but there was a bad winter storm heading for the area and events were being rescheduled around the region.
Listen now to WTOP News WTOP.com | Alexa | Google Home | WTOP App | 103.5 FM
(1/7) 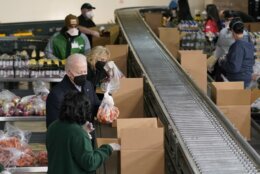 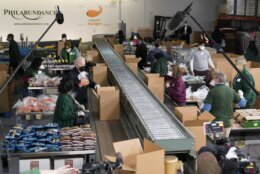 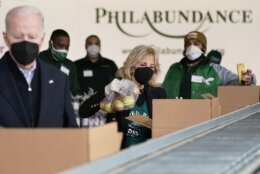 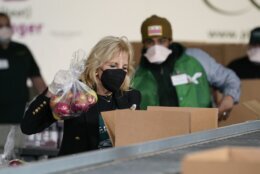 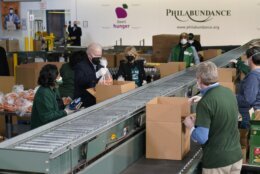 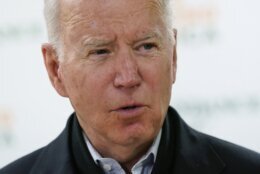 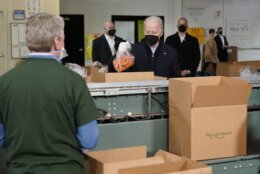 PHILADELPHIA (AP) — President Joe Biden and first lady Jill Biden packed carrots and apples into food boxes for the hungry and chatted with volunteers Sunday at a food bank as part of a day of service for Martin Luther King, Jr. Day.

The couple traveled about a half-hour from their Wilmington, Delaware, residence to Philabundance, a hunger relief organization in Philadelphia which serves about 140,000 people a week in the Pennsylvania and southern New Jersey region. Before heading to the warehouse floor where conveyor belts carried cardboard boxes full of donated food, Biden said the child tax credit needed to be renewed.

The traditional day of service is on the holiday, Monday, but there was a bad winter storm heading for the area and events were being rescheduled around the region.

The monthly credits were part of Biden’s $1.9 trillion coronavirus relief package — and the president had proposed extending them for another full year as part of a separate measure focused on economic and social programs. The added boost was used by families to buy food and other supplies.

But Sen. Joe Manchin, D-W.Va., objected to extending the credit out of concern that the money would discourage people from working and that any additional federal spending would fuel inflation that has already climbed to a nearly 40-year high.

“The child tax credit was really helpful. We’ve got to get it renewed,” Biden said.

They walked out to the warehouse floor as “Wish I Didn’t Miss You” by Angie Stone played softly, donned some gloves and got to work. Jill Biden wore a Philadelphia Eagles T-shirt under her blazer in a nod to the team’s playoff game Sunday afternoon against the Tampa Bay Buccaneers.

Biden chatted with volunteers, including one man standing near a crate of macaroni and cheese who told the president his daughter was a teacher. Biden spoke of the first lady’s teaching career and then asked the man for his daughter’s number and said he’d give her a ring.

Senate Majority Leader Chuck Schumer, D-N.Y., said the Senate will take up voting rights legislation on Tuesday, missing a deadline he initially set for action by Monday, which is MLK Day. Biden spoke forcefully of the need to pass the legislation, likening the modern concerns over election subversion and increasing voting restrictions in states to the civil rights struggles of the 1960s. Biden last week said he supported changing Senate rules to allow the slim Democratic majority to push the package through, though he later acknowledged uncertainty it can pass Congress this year following objections from Manchin and Sen. Kyrsten Sinema, D-Ariz.