Trump’s State of the Union address blended self-congratulation and calls for optimism amid a growing economy with dark warnings about deadly gangs, the scourge of drugs and violent immigrants living in the United States illegally. He cast the debate over immigration — an issue that has long animated his most ardent supporters — as a battle between heroes and villains, praising the work of an immigration agent who arrested more than 100 gang members and saluting the families of two alleged gang victims.

He also spoke forebodingly of catastrophic dangers from abroad, warning that North Korea would “very soon” threaten the United States with nuclear-tipped missiles.

“The United States is a compassionate nation. We are proud that we do more than any other country to help the needy, the struggling and the underprivileged all over the world,” Trump said. “But as president of the United States, my highest loyalty, my greatest compassion, and my constant concern is for America’s children, America’s struggling workers and America’s forgotten communities.” 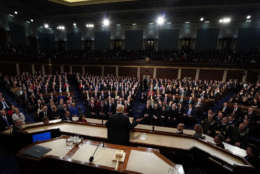 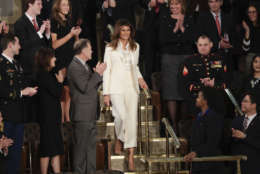 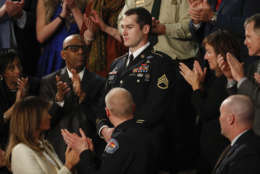 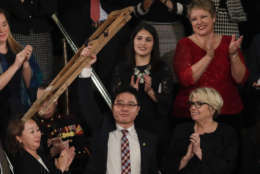 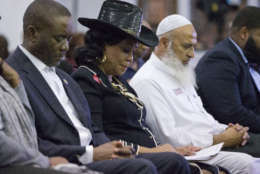 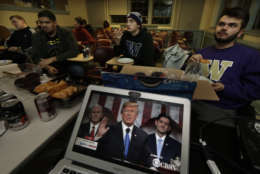 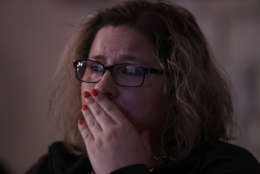 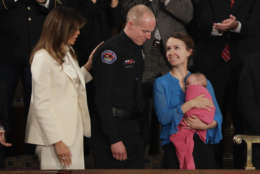 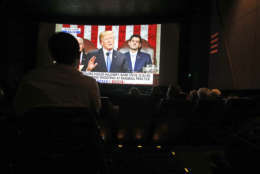 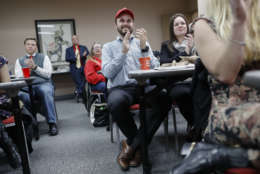 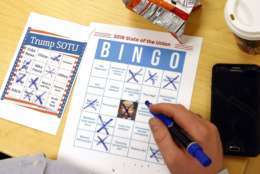 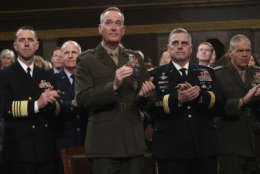 Trump spoke with tensions running high on Capitol Hill. An impasse over immigration prompted a three-day government shutdown earlier this year, and lawmakers appear no closer to resolving the status of the “Dreamers” — young people living in the U.S. illegally — ahead of a new Feb. 8 deadline for funding operations.

The parties have also clashed this week over the plans of Republicans on the House intelligence committee to release a classified memo on the Russia investigation involving Trump’s presidential campaign — a decision the White House backs but the Justice Department is fighting.

The controversies that have dogged Trump have overshadowed strong economic gains during his first year in office. His approval ratings have hovered in the 30s for much of his presidency, and just 3 in 10 Americans said the United States was heading in the right direction, according to a poll by The Associated Press-NORC Center for Public Affairs Research. In the same survey, 67 percent of Americans said the country was more divided because of Trump.

At times, Trump’s address appeared to be aimed more at validating his first year in office than setting the course for his second. He devoted significant time to touting the tax overhaul he signed at the end of last year, promising the plan will “provide tremendous relief for the middle class and small businesses.” He also highlighted the decision made early in his first year to withdraw the U.S. from a sweeping Asia-Pacific trade pact, declaring: “The era of economic surrender is totally over.”

He spoke about potential agenda items for 2018 in broad terms, including a call for $1.5 trillion in new infrastructure spending and partnerships with states and the private sector. He touched only briefly on issues like health care that have been at the center of the Republican Party’s policy agenda for years.

Tackling the sensitive immigration debate that has roiled Washington, Trump redoubled his recent pledge to offer a path to citizenship for 1.8 million young immigrants — but only as part of a package that would also require increased funding for border security, including a wall along the U.S.-Mexico border, ending the nation’s visa lottery method and revamping the current legal immigration system. Some Republicans are wary of the hardline elements of Trump’s plan and it’s unclear whether his blueprint could pass Congress.

Trump played to the culture wars, alluding to his public spat with professional athletes who led protests against racial injustice by kneeling during the national anthem, declaring that paying tribute to the flag is a “civic duty.”

Republicans led multiple rounds of enthusiastic applause during the speech, but for the opposition party, it was a more somber affair. Democrats provided a short spurt of polite applause for Trump as he entered the chamber, but offered muted reactions throughout the speech. A cluster of about two dozen Democrats, including members of the Congressional Black Caucus, remained planted firmly in their seats, staring sternly at the president and withholding applause.

In a post-speech rebuttal, Massachusetts Rep. Joe Kennedy, the grandson of Robert F. Kennedy, sought to undercut Trump’s optimistic tone and remind voters of the personal insults and attacks often leveled by the president. “Bullies may land a punch,” Kennedy said. “They might leave a mark. But they have never, not once, in the history of our United States, managed to match the strength and spirit of a people united in defense of their future.”

On international affairs, Trump warned of the dangers from “rogue regimes,” like Iran and North Korea, terrorist groups, like the Islamic State, and “rivals” like China and Russia “that challenge our interests, our economy and our values.”

Calling on Congress to lift budgetary caps and boost spending on the military, Trump said that “unmatched power is the surest means of our defense.”

The president also announced that he had signed an executive order directing the Department of Defense to keep open the U.S. prison at Guantanamo Bay. The order reverses the Obama-era policy of the executive branch, long stymied by Congress, to close the prison.

First lady Melania Trump, who has largely stayed out of the spotlight following the latest allegations of Trump infidelity, arrived at the Capitol ahead of her husband to attend a reception with guests of the White House. Those sitting alongside the first lady included an Ohio welder who the White House says will benefit from the new tax law and the parents of two Long Island teenagers who were believed to have been killed by MS-13 gang members.

donald trump | state of the union