WASHINGTON (AP) — President Joe Biden informed Congress on Monday that he will end the twin national emergencies for addressing COVID-19 on May 11, as most of the world has returned closer to normalcy nearly three years after they were first declared.

The move to end the national emergency and public health emergency declarations would formally restructure the federal coronavirus response to treat the virus as an endemic threat to public health that can be managed through agencies’ normal authorities.

It comes as lawmakers have already ended elements of the emergencies that kept millions of Americans insured during the pandemic. Combined with the drawdown of most federal COVID-19 relief money, it would also shift the development of vaccines and treatments away from the direct management of the federal government.

Biden’s announcement comes in a statement opposing resolutions being brought to the floor this week by House Republicans to bring the emergency to an immediate end. House Republicans are also gearing up to launch investigations on the federal government’s response to COVID-19.

Then-President Donald Trump’s Health and Human Services Secretary Alex Azar first declared a public health emergency on Jan. 31, 2020, and Trump later declared the COVID-19 pandemic a national emergenc y that March. The emergencies have been repeatedly extended by Biden since he took office in January 2021, and are set to expire in the coming months. The White House said Biden plans to extend them both briefly to end on May 11.

“An abrupt end to the emergency declarations would create wide-ranging chaos and uncertainty throughout the health care system — for states, for hospitals and doctors’ offices, and, most importantly, for tens of millions of Americans,” the Office of Management and Budget wrote in a Statement of Administration Policy.

More than 1.1 million people in the U.S. have died from COVID-19 since 2020, according to the Centers for Disease Control and Prevention, including about 3,700 last week.

Congress has already blunted the reach of the public health emergency that had the most direct impact on Americans, as political calls to end the declaration intensified. Lawmakers have refused for months to fulfill the Biden administration’s request for billions more dollars to extend free COVID vaccines and testing. And the $1.7 trillion spending package passed last year and signed into law by Biden put an end to a rule that barred states from kicking people off Medicaid, a move that is expected to see millions of people lose their coverage after April 1.

“In some respects, the Biden administration is catching up to what a lot of people in the country have been experiencing,” said Larry Levitt, the executive vice president for health policy at Kaiser Family Foundation. “That said, hundreds of people a day are still dying from COVID.”

Still, some things will change for Americans once the emergency expires, Levitt pointed out.

The costs of COVID-19 vaccines are also expected to skyrocket once the government stops buying them, with Pfizer saying it will charge as much as $130 per dose. Only 15% of Americans have received the recommended, updated booster that has been offered since last fall.

People with private insurance could have some out-of-pocket costs for vaccines, especially if they go to an out-of-network provider, Levitt said. Free at-home COVID tests will also come to an end. And hospitals will not get extra payments for treating COVID patients.

Legislators did extend for another two years telehealth flexibilities that were introduced as COVID-19 hit, leading health care systems around the country to regularly deliver care by smartphone or computer.

The Biden administration had previously considered ending the emergency last year, but held off amid concerns about a potential “winter surge” in cases and to provide adequate time for providers, insurers and patients to prepare for its end.

Officials said the administration would use the next three months to transition the response to conventional methods, warning that an immediate end to the emergency authorities “would sow confusion and chaos into this critical wind-down.”

“To be clear, continuation of these emergency declarations until May 11 does not impose any restriction at all on individual conduct with regard to COVID-19,” the administration said. “They do not impose mask mandates or vaccine mandates. They do not restrict school or business operations. They do not require the use of any medicines or tests in response to cases of COVID-19.”

Case counts have trended downward after a slight bump over the winter holidays, and are significantly below levels seen over the last two winters — though the number of tests performed for the virus and reported to public health officials has sharply decreased.

On Monday, the World Health Organization said the coronavirus remains a global health emergency, even as a key advisory panel for the group found the pandemic may be nearing an “inflexion point” where higher levels of immunity can lower virus-related deaths. China, for example, reported an unprecedented surge in December after lifting most of its COVID-19 restrictions.

“The country has largely returned to normal,” Cole said Monday, introducing a Republican-backed bill calling for an end to the health emergency. “Everyday Americans have returned to work and to school with no restrictions on their activities. It is time that the government acknowledges this reality: the pandemic is over.”

The House was scheduled to vote Tuesday on legislation that would terminate the public health emergency.

The bill’s author, Rep. Brett Guthrie, R-Ky., said he still hopes the House will proceed with a vote. He said he was surprised by the White House move, but thinks the legislation may have played a role in prompting the administration to act.

“I think we should go forward,” he said late Monday as lawmakers returned to the Capitol. “If for some reason they don’t do it on May the 11th, the vehicle is still there for Congress to take back its authority.” 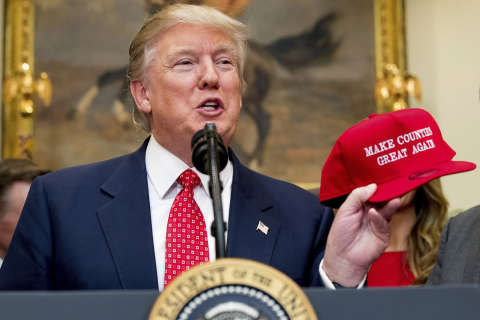