What created the intense rainmaker over Ellicott City?

WASHINGTON — A line of slow-moving storms meshed with a weak frontal system that had stalled over Maryland to create the intense rainmaker that dumped almost 6 inches of rain on Howard County in just two hours Saturday night, resulting in flash flooding that ripped apart historic Ellicott City and killed two people.

The storms followed a typical summertime pattern, moving from west to east.

“Everything was just right for it to unleash [all of that rain],” Ricketts said.

“We knew the storm that day would be an efficient rain producer,” said Steve Zubrick, science and operations officer for the Baltimore-Washington Weather Forecast Office in Sterling.

Although some lightning was reported, the storm itself wasn’t an intense thunderstorm and produced mostly rain.

Radar imagery shows the storm seem to regroup and regenerate before moving out of the area at about 9 p.m., Zubrick said.

“We couldn’t be specific where,” he said of the warnings. “It’s possible this could have been over D.C. or a corn field in Frederick County, Maryland.”

Instead an evening storm moved across Howard County, stretching from Baltimore County to Germantown. The heaviest rain centered on Ellicott City, a town built among several creeks that flow into the Patapsco River.

Water levels were 6 to 10 feet high on that stretch of Main Street, where the road curves slightly, he said.

In all, 6.6 inches of rain fell in the area of Ellicott City on Saturday. The National Weather Service estimated that there is a 0.1 percent chance of that much rain falling in such a short amount of time in any given year on a particular location.

Ellicott City has received similar amounts of rain in the past. In 2011, the remnants of Tropical Storm Lee dropped about 6 inches over 22 hours, which allowed the rain to infiltrate the ground or to run off slowly into area waterways, Zubrick said.

“In this case, on Saturday, it came in just a deluge in two hours,” he said.

At Catonsville, the river crested at 27 feet. And a gauge at Elkridge in the Patapsco Valley State Park crested at 23.6 feet. Both are records, according to the weather service. 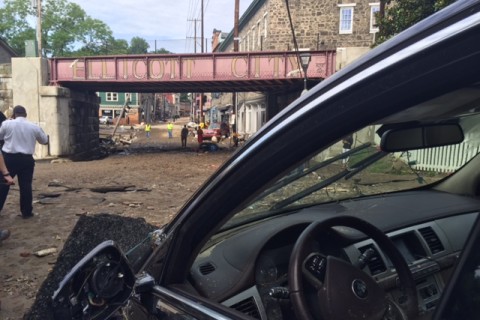 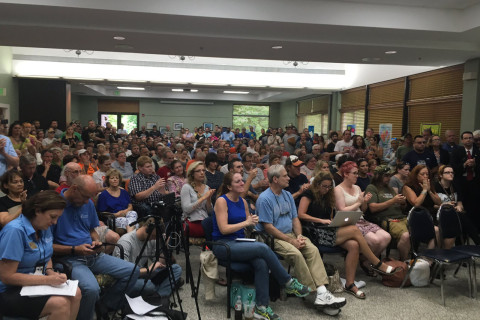