WASHINGTON — A double whammy of weather is headed to the region and phase one is already knocking on our doorstep, but…
Listen now to WTOP News WTOP.com | Alexa | Google Home | WTOP App | 103.5 FM

WASHINGTON — A double whammy of weather is headed to the region and phase one is already knocking on our doorstep, but now it looks as if a change in path will take the bite out of the second phase.

The latest track by the National Hurricane Center keeps the storm offshore and parallels it to the coast having little impact on our region. The biggest concern close to home will be high surf and beach erosion. It will likely weaken to a tropical storm by early Tuesday morning off the New England coast.

Earlier, it appeared as if the hurricane was aiming for the East Coast and could cause major damage.

A front passed through the region Wednesday, dropping the humidity and bumping the winds. Winds will continue for at least the next several days so hold on to your hat. That front has now stalled to the south, just off the east coast.

Through the day today, expect periods of light rain and drizzle through the WTOP listening area and certainly cool conditions as a strong high pressure system around Quebec, Canada continues to push cool air into the region (temperatures running a good 15 — 20 degrees cooler than Wednesday).

Thursday’s rain will eventually increase in intensity. All while this is happening, energy aloft is flowing through the Ohio Valley. Eventually an upper level low will form southeast over the Southern Appalachians and move through the Deep South. This will eventually push that front back toward the D.C. region, bringing the heavy rain that is now off the east coast with it. Through the weekend, that upper level low will go somewhat stationary around northern Florida (these factors aide in the movement of Joaquin as well).

Hurricane Joaquin is a very impressive storm so far. It has been 3,628 days since a major hurricane has hit the United States. The last one was Wilma on October, 24th in 2005. Hopefully we can keep that streak alive.

An eye is trying its best to form, but has not done so yet. This is a very impressive storm. Earlier this morning, the now Category 4 Hurricane Joaquin had extremely cold cloud tops. In fact, temperatures for those were running -90 degrees C/-130 degrees F. That is telling us that some of the storms in Joaquin could be 60,000 feet tall!

As of 11 a.m. EDT, the storm had sustained winds up to 125 mph with a southwest movement at just 6 mph. The pressure is 942 mb, a 6 mb drop over six hours, which means it is intensifying. It is currently meandering around the 700 islands of the Bahamas, where there are multiple hurricane warnings.

Storm surge in that region (central Bahamas) is going to be extremely dangerous. In fact, the storm surge will raise water levels by as much as 5-10 feet above the normal tide levels. Hurricane Joaquin is pegged to intensify for the next 12-24 hours as well as it feeds off the very warm water around the Bahamas.

The newest track came out at 11 a.m. EDT. It has only nudged slightly to the east due to uncertainly based on model guidance. The factors outlined above (high pressure in Canada, upper level low in the Deep South) will all aid steering Joaquin and dictate its final track.

Looks like the newest #Joaquin track (11aET) is just a touch east but mostly the same-offshore @wtop @nbcwashington pic.twitter.com/9iVZTWNR5i

Model data still varies, with some guidance taking it out to sea and others having it making landfall on the East Coast. There is still a possibility that it could remain very far off the east coast. It eventually will weaken to a tropical storm as it moves north of Delaware and into colder waters.

Again, this track is subject to change. There are many factors that go into determining a track and there is still time for it to change. The main threat would most likely be Sunday evening into early Tuesday morning. At that time, expect very gusty winds, heavy rain and potential flooding. Those along the coast should be prepared for beach erosion, rip currents and high waves along with very strong winds.

Either way, begin preparing and make sure you have your emergency kit ready: flashlight, batteries, water, food, radio, first aid kit, car charger, whistle and helmet just to name a few. Also, be sure to lower pool levels (if the pool is still open), clean out gutters and drainage ditches. It also might be a good idea to relocate items in the basement if your residence is in a low-lying area that is prone to flooding.

Visit our live blog and tune in every ten minutes on the 8’s for the latest on the storms. 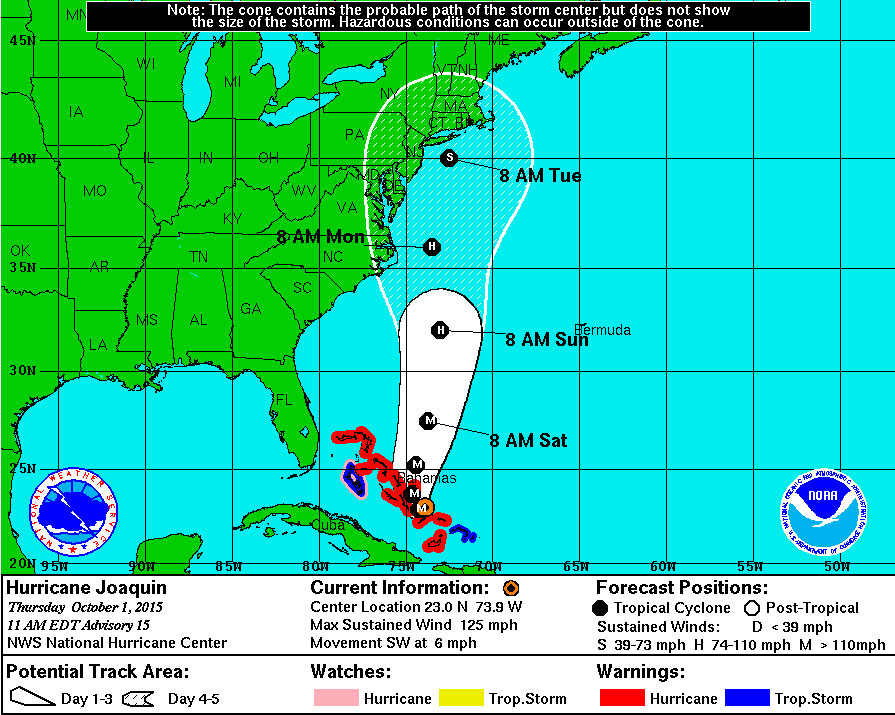