The D.C. area is once again getting hit with heavy rains and threats of flooding. A flash flood watch has been issued for parts of the area that extends until 5 a.m. Monday.
Listen now to WTOP News WTOP.com | Alexa | Google Home | WTOP App | 103.5 FM
(1/3) 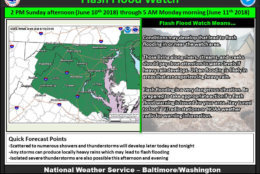 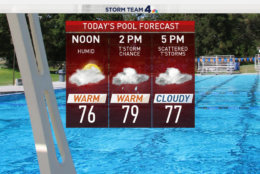 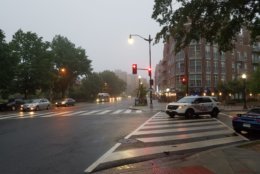 WASHINGTON — Showers, storms and possible flooding are all in the forecast for the D.C. area on Sunday and into Monday morning.

The National Weather Service has issued a flash flood watch for parts of the D.C. area that will be in effect until 5 a.m. on Monday.

A flash flood watch means that conditions may develop that lead to flash flooding.

Keep an eye to the sky again today! Thunderstorms are expected to develop later today and tonight, which may produce heavy rains, leading to flash flooding. Isolated severe thunderstorms are also possible this afternoon and evening. Check https://t.co/t54l4ELo2o for the latest. pic.twitter.com/F3mHzOQLlm

The weather service said multiple rounds of showers and thunderstorms are expected on Sunday afternoon into Sunday night that could produce 1 to 3 inches of rain on average.

“Flash flooding is definitely a possibility,” said Storm Team 4 meteorologist Lauryn Ricketts. “We will have to closely monitor the flood threat for the second half of your Sunday.”

And in Howard County, where flooding devastated Ellicott City weeks ago, officials are taking proper precautions ahead of the heavy rain and lightning expected in the county around 4 p.m. Howard County officials have paused cleanup efforts and credentialing.

Due to impending weather, CREDENTIALING at @HoCoGov George Howard Building and CLEANUP OPERATIONS along Main Street, #EllicottCityMD will END TODAY, June 10 at 3:30 p.m. We are asking those working in this area to wrap up today’s cleanup efforts immediately. #ECStrong

Rickets said thunderstorms containing heavy rain should be expected through the overnight hours on Sunday into Monday.

The National Weather Service has issued a flash flood watch for the following areas until 5 a.m.:

A flash flood watch means that conditions may develop that lead to flash flooding, which is a very dangerous situation.

Previously, the National Weather Service had issued the flash flood watch for the most of the D.C. area, but the watch was cancelled for D.C., Virginia and parts of Maryland just after 2 a.m.

The weather service said on average rainfall amounts from 1 to 3 inches are expected, though some areas could see higher amounts.

Temperatures peaked around 80 on Sunday. You can expect showers and storms with heavy rain through much of Sunday afternoon into the overnight. Highs will be in the 60s on Sunday night.

On Monday, the humidity will decrease with highs near 70 as showers continue.

The humidity returns on Tuesday. Highs will be in the lower to mid 70s, there could be a few showers but skies will be partly sunny.

Things get warmer on Wednesday with highs in the mid 80s. Wednesday will be more humid and there is a chance for storms.

The rain could lead to slick roads, which could cause a lot of traffic headaches around the region.