There could be snowfall April 7, but according to meteorologists, the showers will contain more rain than snow for most parts of the D.C. region. Snowfall is relatively rare for April but not unheard of in the D.C. area.
Listen now to WTOP News WTOP.com | Alexa | Google Home | WTOP App | 103.5 FM
(1/4) 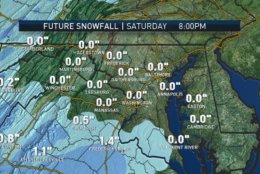 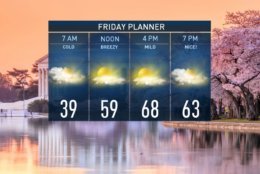 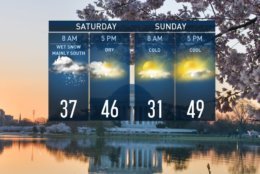 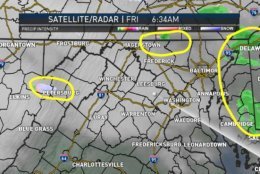 WASHINGTON — April’s showers may well contain a snowy mix Saturday but it’s likely they will have a minor impact and be confined to areas south of the D.C. region, according to meteorologists.

“Light rain will move in after midnight. It will start as rain with temperatures in the mid-40s until nearly daybreak. As the rain increases in intensity early Saturday morning it will help to cool the atmosphere,” Bell said.

“Saturday almost all clouds all day long, pockets of light rain and possibly a few wet snowflakes mixed in, better chances of seeing a slight accumulation of snow, an inch or less down toward Fredericksburg on the south side of the area, as opposed to north of the city,” he added.

Storm Team4 Meteorologist Sheena Parveen is tracking the potential snowfall. She said it looks as though areas south of D.C. could be affected but that the forecast might change during the day Friday.

The biggest “threat” of the weekend will be the odds of a hard freeze Sunday morning. Cherry Blossoms do not fair well below freezing and most areas will be in the upper 20s to around 30 Sunday morning, according to Bell.

Sunday will be sunny and chilly. 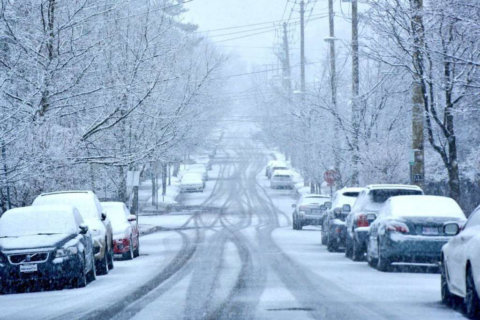