The advisory from the National Weather Service has greatly expanded, covering virtually all of the D.C. area and extending from 10 p.m. Wednesday through 11 a.m. Thursday. That spells a tough Thursday-morning commute for a lot of people. Find out what Storm Team 4 chief meteorologist Doug Kammerer says is coming, and what area highway officials say they're doing to get ready.
Listen now to WTOP News WTOP.com | Alexa | Google Home | WTOP App | 103.5 FM

WASHINGTON — Several school systems have delayed openings for Thursday morning, and Virginia Gov. Terry McAuliffe has declared a state of emergency as snow fell during the overnight hours.

The National Weather Service has issued Winter Storm Warning  for Calvert and St. Mary’s County in Maryland until 11 a.m. Thursday. The heaviest snow is expected through 4 a.m.

A Winter Weather Advisory covers D.C. and much of eastern Maryland, as well as Arlington and Fairfax counties in Virginia and more. It lasts from 10 p.m. Wednesday until 11 a.m. Thursday.

As predicted, the coastal areas bore the brunt of the winter storm. Nearly 100 Virginia National guard were deployed for response operation.  As of 10 p.m. Wednesday, the National Weather Service reported that light snow spread into portions of central Virginia and southern Maryland.

School systems in D.C., Maryland and Virginia announced delays and some closures for  Thursday. Find the latest from the schools on WTOP’s Closings and Delays page.

The snow is coming from a brutal winter storm that has scattered a mix of snow, sleet and freezing rain, which heads from normally balmy north Florida up the Southeast seaboard.

Storm Team 4 Chief Meteorologist Doug Kammerer said that the storm is “not going to be a big snow-maker” in the D.C. area, but what falls will affect Thursday morning commute throughout the area.

Around the Capital Beltway, commuters can expect about an inch of snow. Western areas, around Gaithersburg, Maryland, and Manassas and Herndon in Virginia, will get “a coating.” To the east, Prince George’s and Anne Arundel counties in Maryland will get 1 to 2 inches, while Calvert and St. Mary’s counties will see 2 to 4 inches.

“This is going to [cause] problems area-wide. Even a coating on the roadways could cause big problems,” Kammerer said, because it has been so cold over the past few days. “Anything that falls [Wednesday night] is going to stick on those roadways.”

The National Weather Service agrees, saying in a statement, “Snow will stick on paved surfaces, causing hazardous conditions during the Thursday morning commute.”

The “absolutely freezing” temperatures of the past few days have lowered the pavement temperatures, said Charlie Gischlar with the Maryland State Highway Administration.
“Anything that hits the ground has a potential to freeze,” he said.

Ellen Kamilakis, with the Virginia Department of Transportation, told WTOP in an email that Wednesday afternoon’s relatively warm 26-degree temperatures made it “warm enough to brine,” and that residual salt from earlier applications was already on many roads.

Gischlar’s advice? “Just be prepared.” The water main breaks in the area in the past few days are a good illustration of how bad and icy it can get, he said. “Wherever you go, it’s wintertime; it’s freezing out there. If something looks wet out there, treat it like it’s icy.”

The National Weather Service said the snow and freezing rain was expected to spread up the coast to the Carolinas, amid warnings that icy roads and low visibility could make driving treacherous. Accumulations of 3 to 5 inches were possible in eastern North Carolina.

The storm is the result of what meteorologists call a bomb cyclone, or bombogenesis. That happens when the pressure of a storm drops 24 millibars in 24 hours — a sign that the storm is getting much more powerful in a hurry. Read more about the term and what it means.

In other parts of the U.S., dangerously cold temperatures have been blamed for at least a dozen deaths, as well as freezing a water tower in Iowa and halting ferry service in New York.

Amtrak says it is monitoring weather conditions and urges customers to check their train status at Amtrak.com. Announcements about service changes will be posted to Amtrak’s alerts page.

If you think it’s been cold so far, even worse is on the way.

Friday morning temperatures are forecast to be below 10; the wind chill, below 0. Afternoon highs may not even reach 20, and wind chills will stay below 10.

It’s the same, bitter story for Saturday. Sunday should see the area hit highs around 30.

The Associated Press and WTOP’s Joslyn Chesson contributed to this report. 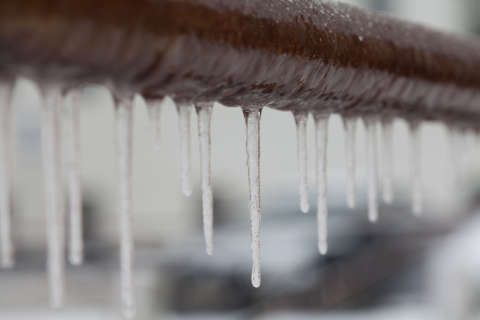 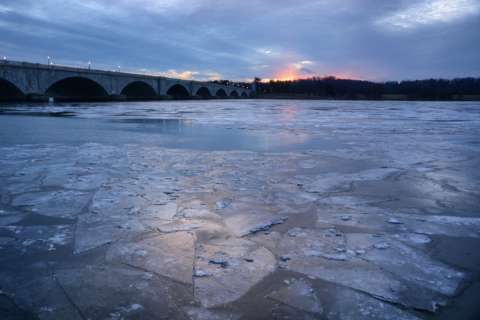 Is Fido freezing? How to keep pets safe during cold snaps