After the D.C. region was slathered in ice and snow, authorities are now warning about bone-chilling wind chills that are set to plunge the area into a deep freeze Thursday night into Friday morning.
Listen now to WTOP News WTOP.com | Alexa | Google Home | WTOP App | 103.5 FM

WASHINGTON — After the D.C. region was slathered in ice and snow, authorities are now warning about blustery winds and bone-chilling temperatures that are set to plunge the area into a deep freeze Thursday night into Friday morning.

The National Weather Service has issued a Wind Chill Advisory for much of the D.C. region from 10 p.m. Thursday until noon Friday. The weather service said strong winds out of the northwest will average between 20 and 30 mph Thursday evening with some gusts reaching 50 mph.

Currently, there’s a wind advisory in effect until 7 p.m for most of the D.C. region warning of gusts up to 50 mph. The weather service said the strong winds could make driving difficult and may topple tree limbs and power lines.

The continued strong winds overnight will drag “feels-like” temperatures down to subzero levels all across the region by early Friday morning, prompting concerns about frost bite and hypothermia.

#WeatherAlert: Dangerous cold the next few mornings. These are the forecast #WindChills for early Friday morning. Take precautions to protect people, pets and pipes. #Working4You pic.twitter.com/KjMM5zP6OD

There are also concerns that the brutally cold temperatures could encrust wet, slushy roads in layers of ice.

For Thursday, temperatures are expected to remain in the 20s until about sun down, when the winds pick up, dropping wind chills to near zero. By Friday morning, the wind chills in some areas could be anywhere from five degrees to 15 degrees below zero, said WTOP meteorologist Matt Ritter.

Wind chills that cold can cause frostbite to exposed skin in as little as 30 minutes, experts say.

The sun is expected to make a return Friday, but wind chill temperatures are expected to remain in the single digits it not zero all day.

The region has already been shivering through an uncharacteristic cold snap. Since Dec. 26, Reagan National Airport has only reached above freezing three times, Ritter said. That includes a brief warm-up Wednesday — when the high reached 35 degrees.

The colder-than-normal temps have burst pipes and water brain breaks and wreaked havoc on car and school bus engines.

DC Water tweeted Thursday its crews have responded to 141 water main breaks since Dec. 1 — with half of those occurring just in the last few days.

Meteorologists say you shouldn’t expect much of a warm-up this weekend. Highs are only forecast to reach the teens both days, although the winds are expected to gradually die down.

One good reason to look forward to Monday? The mercury is expected to finally slide up above freezing Monday afternoon, with forecast highs near 40 degrees. But with the warmer temps comes the possibility for precipitation — and we don’t mean more snow.

“With that January thaw, there may actually be some rain possible on Monday and Tuesday, but that’s not set in stone yet,” Ritter said.

Are you too cool? Warning signs you’re dangerously cold in freezing weather 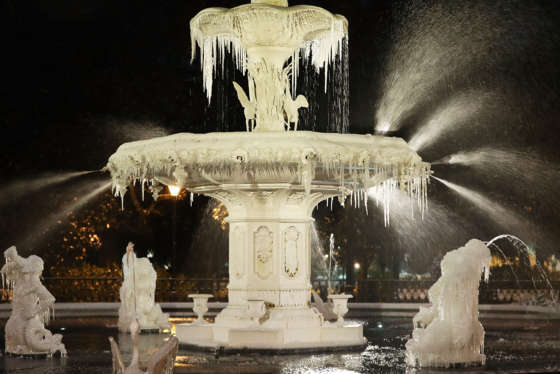 A winter storm is making its way to the Northeast and mid-Atlantic Thursday, following a visit that brought snow and ice to Florida and many Southeastern states. See photos of the brutal winter storm throughout the nation.