The D.C. region could see its first snowfall of the season this weekend. The National Weather Service has issued a Winter Weather Advisory for midnight to 4 p.m. Saturday. Here's what you need to know.
Listen now to WTOP News WTOP.com | Alexa | Google Home | WTOP App | 103.5 FM

WASHINGTON — Snow has begun to fall in Southern Maryland, where 4 to 8 inches of snow are now expected by Saturday afternoon.

The National Weather Service has extended a Winter Storm Warning for Stafford and Spotsylvania counties including Fredericksburg in Virginia until 4 p.m. on Saturday.

In Maryland, Calvert, St. Mary’s and Charles counties are also under a Winter Storm Warning until 4 p.m.

Snow has already begun falling in parts of Southern Maryland and the Northern Neck area of Virginia. The snow will continue overnight with totals reaching 4 to 8 inches and in some cases, even more.

Two to 4 inches of snow is possible throughout the D.C. region however the heavy, wet snow is not expected to stick to roads in the immediate D.C. area, where a Winter Weather Advisory begins at midnight and continues through 4 p.m. Saturday.

See the latest closings and cancellations

Light snow began to fall in St. Mary’s County on Friday afternoon and is expected to pick up Friday evening into the overnight hours, said Storm Team4 meteorologist Somara Theodore.

A Winter Storm Warning is in effect for Southern Maryland including Calvert, Charles and St. Mary’s counties. The warning also now includes Stafford and Spotsylvania as well as the city of Fredericksburg.

A Winter Weather Advisory has been issued for the I-95 corridor from midnight Saturday to 4 p.m.

Storm Team4 meteorologist Doug Kammerer said the coastal system is skimming our area and the latest models have pushed this stream of moisture deeper inland and west.

The immediate D.C. area will see a chance for snow showers beginning around 4 a.m. on Saturday. Snow should start tapering off by Saturday evening with the D.C. area seeing between 2 to 4 inches, Theodore said

Temperatures should be in the mid 30s during the day. But roads could refreeze Saturday night.

But don’t expect much accumulation on treated roads. However on grassy surfaces or untreated pavement, Draper said.

Areas to the north and west of D.C. could see less snow. Higher snow totals are expected in the Southern Maryland peninsula and the Northern Neck area of Virginia.

The snow will end between 4 and 7 p.m. Saturday.

The winds will start to move in on Sunday, making for a very cold and blustery Sunday. The windchill may feel like it is in the teens at time.

WTOP Traffic will be monitoring all road conditions 24 hours a day. You can listen live on the 8s at 103.5 FM. For the most recent traffic report, visit WTOP’s Traffic page.

WTOP’s Max Smith said that snow began to fall along I-95 just south of Fredericksburg, Virginia, a little before 10 p.m. on Friday. Traffic was steady, but even with a little open road, drivers were opting to stay below 60 mph.

The Virginia Department of Transportation began pre-treating roads in the D.C. suburbs on Thursday and continued on Friday.

VDOT crews will head out to begin salting overnight. They won’t plow unless at least 2 inches of snow is on the pavement, said spokeswoman Ellen Kamilakis.

Brine pre-applied to roads in Northern Virginia should turn any snow into slush, she said.

She urged drivers to give VDOT salt trucks lots of room. They big, heavy trucks take longer to slow down and make wide turns. She said if drivers can hear the salting pinging off their windshield, they are following the truck too closely.

VDOT posts road temperatures online, which are a great tool for drivers to check before they hit the road.

Contractors with additional trucks are on standby and can be called in to help with snow removal if needed, Slater said.

“We are geared up and ready to go,” Slater said.

His tip to drivers: Posted speed limits were designed for dry pavement. Give other vehicles plenty of space and slow down.

D.C. did not pre-treat roads but crews will begin treating the roads with salt about 2 a.m. All D.C. roads will be covered including residential streets, said Chris Shorter, director of the Department of Public Works.

“We assume we’ll move into a plowing operation by (Saturday) morning,” Shorter said.

Shorter asked that drivers give the plows room to work.

How to check road temperatures:

VDOT posts road temperatures on its 511Virginia.org site. In the left navigation bar, choose the weather drop-down. Then click the button for pavement temperatures.

WTOP’s Michelle Basch, Will Vitka and Max Smith contributed to this report.

Some ACT tests canceled as snow moves into region 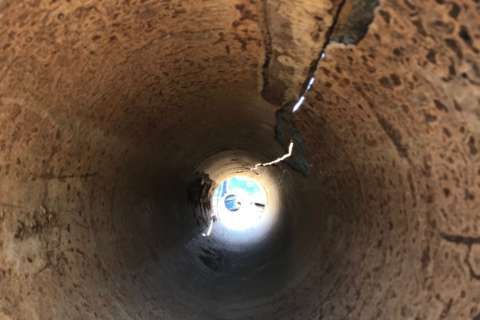 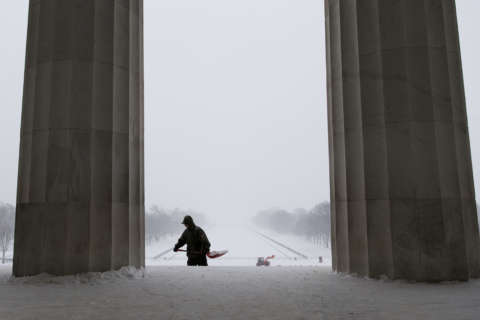