The Washington Wizards lost to the Boston Celtics 130-121 on Sunday night. Here are five takeaways from what went down…

The last three games for the Wizards have in a way represented a measuring stick for where they stand in the Eastern Conference. They played the Heat twice in Miami, then the Celtics in Boston, the two teams that met in last year’s conference finals. Against the Wizards, both teams were missing their best players; Jimmy Butler and Jayson Tatum.

Washington lost all three of those games. Even without Tatum, the Celtics coasted to victory over the Wizards on Sunday night in a game that was not nearly as close as the final score would suggest. They led by as many as 26 points.

The Wizards continue to have a long injury list themselves and Kyle Kuzma was added to it on Sunday. He missed this game due to lower back pain, joining Rui Hachimura (ankle), Delon Wright (hamstring) and Johnny Davis (groin) on the sidelines. Hachimura missed his fourth straight game.

While Tatum was out, the Celtics did not slow down one bit on the offensive end. They shot 16-for-34 from three, making 11 triples in the first half alone. Boston shot 55% for the evening overall. The Wizards, meanwhile, shot 7-for-28 (25%) from deep.

The Wizards have now lost three straight games, matching their longest losing streak of the season so far. They will return home Monday to play the Timberwolves in the second game of a back-to-back before heading out on the road again to play Brooklyn on Wednesday.

While they had to play down several key players, Washington did get Monte Morris back in their starting lineup. He returned after missing two games with a right ankle injury. Morris was sharp, too, making his first four shots in the game, including three threes. He finished with 16 points and eight assists, shooting 6-for-8 from the field and 4-for-5 from beyond the arc.

Three of Morris’ four long-range shots were all on catch-and-shoot plays, which served as a reminder he is very good at those. Last season in Denver, he made 42.1% of his catch-and-shoot threes and on decent volume at 3.2 attempts per game. He has shot at least 39% on those plays the last four seasons before this one, but came into this game shooting just 30.6% in those situations this year. Maybe this was the start of him reversing that trend.

The 3-point line wasn’t the only area Boston enjoyed a major advantage in this game, they also dominated the Wizards on the glass. The Celtics won the rebounding battle 38-to-29, including 24-to-12 in the first quarter. Boston entered the day 24th in the NBA in total rebounding, but you wouldn’t have known it in this game.

That may have been why head coach Wes Unseld Jr. opted to go with Taj Gibson as his backup center instead of Daniel Gafford. Boxing out is one of Gibson’s best skills and the Wizards needed some muscle against the Celtics’ fleet of players with NFL builds. Gafford, it’s worth noting, played very well in his last game in sparse minutes, so it was likely nothing he did wrong. But he didn’t play in this game until the result had long been decided.

The Wizards have now lost both of their games to the Celtics in lopsided fashion. Granted, both games were on the road in Boston, but the Celtics are proving to be a difficult matchup for the Wizards early this season. They held Bradley Beal to a uniquely bad shooting night in the first meeting and in this one handled the Wizards fairly easily without their best player. In both games, Jaylen Brown (36 points on Sunday) was a problem and Robert Williams didn’t play in either of them.

The Celtics are very good, of course, as evidenced by the fact they made the NBA Finals last season. They also have the best record in the NBA currently at 16-4. But it’s something for the Wizards to keep in mind going forward in the event of a potential playoff matchup. The Celtics and Wizards started the day as the No. 1 and 8 seeds in the East, so it’s entirely possible they meet in the spring. Maybe the Wizards can help close the gap either by improving over the course of this season or by addressing some matchup-specific needs at the trade deadline. Getting healthy first would help.

Dotson got some run

Even though Morris was back and Jordan Goodwin was in the rotation, Unseld Jr. gave Devon Dotson some playing time. It was the first time he’s played this season, as he now holds the second two-way contract after replacing Jordan Schakel in that spot.

Doston got the nod in the third quarter as the game was very quickly getting out of hand. So, Unseld Jr. was probably looking for a spark from a young player, perhaps some more effort defending the perimeter. As Goodwin has proven, you never know when or from where someone can emerge. Dotson logged 18 minutes, grabbing four rebounds to go along with two assists and a steal. 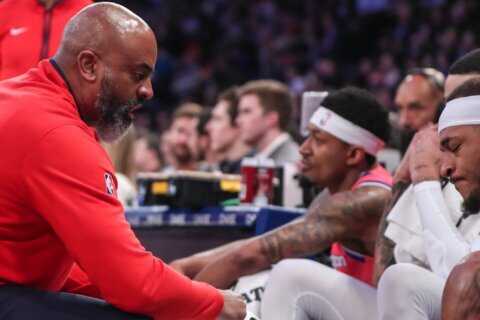 What should the Wizards target at the NBA trade deadline? 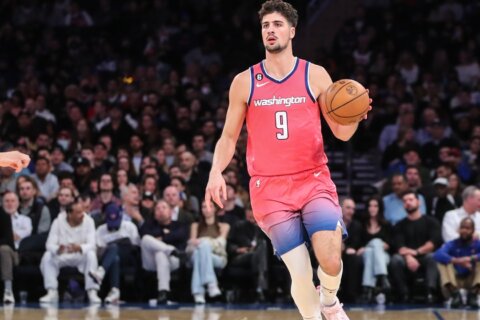