Holidays: Where to see holiday lights | Santa's back with inflation, inclusion on his mind | 4 ways to limit your holiday debt | Inflation 'definitely a guest' at holiday celebrations this year
Home » Washington Wizards » Corey Kispert finds his…

Corey Kispert (18 points) rose to the occasion with a perfect night from the field and hit four threes in the Wizards' win over the Utah Jazz.
Listen now to WTOP News WTOP.com | Alexa | Google Home | WTOP App | 103.5 FM

WASHINGTON — It’s not a coincidence that the Washington Wizards‘ best 3-point performance came on the night when perhaps their biggest 3-point asset had the best game of his season. Against one of the fastest, up-tempo and deep-ball shooting teams in the league, the Wizards needed to find their stroke from behind the arc just to keep up.

Corey Kispert (18 points) rose to the occasion with a perfect night from the field and hit four threes in the Wizards’ win over the Utah Jazz.

Since missing the first eight games of the season with an ankle injury, Kispert has been working himself back into the flow of the game. Finding his shooting legs — as is the case with many three-point shooters that miss time due to injury — is a common obstacle to overcome.

It simply all came together for him in a big game for the Wizards.

“Just time I guess,” Kispert said when asked what got him going. “Giving it enough time to let my game breathe and knock the rust off. Nothing really changed as far as how I prepared or what I did or ate for lunch today, it was just a matter of time. Yes, not to say it didn’t feel great, playing that well felt awesome.”

Until facing the Jazz, Kispert had yet to make an impact in his four games back. He missed all six of the shots he took in his season debut against the Nets. Two total threes were all he managed to hit even as his playing time increased with a starting role. Most of Kispert’s impact had been cutting to the basket and hitting layups at the rim.

But he found his stroke a week and a day following his return. So did the team. Not only did Kispert hit all his 3-point attempts, but Washington also had their best night of the year from beyond the arc.

“He’s one of the best shooters on our team and when he gets going, when he has that rhythm and that shot locked in, they have to choose,” Kristaps Porzingis said postgame. “What I love about him is how good of a cutter he is… he’s playing like a 10-year vet in a lot of the situations. He’s making the right reads, he’s making hard cuts, he’s doing all the right things. Like the small things, the important things, maybe not the visible things, really well and that’s helping the whole team.”

It’s not only Kispert who has struggled beyond the arc. The Wizards are the worst 3-point shooting team in the league in terms of both makes (9.2 per game entering the game) and percentage (32.3%). Washington continued to emphasize through their early struggles that once the best 3-point shooter in the 2021 NBA Draft got back, they would improve.

It took some time, but the boost has come.

But with the additional focus on Kispert’s return, the pressure to perform increased. After all, that’s his role on the team as currently constructed and the plan heading into this year. Over 62% of his shots last season were from 3-point range.

“I try not to [feel the pressure] but it’s natural, right? That’s the reason why I made it to this league and that’s my job,” Kispert said. “That’s my job to go out there and shoot. When the shots aren’t failing, it gets frustrating for sure but nights like tonight kind of make it all worth it when everything is clicking. We play so many games and there’s so many opportunities that you’re bound to put together some hot streaks and if you do the right thing over the course of 82 games, you’re going to win a lot of them.”

It’s going to take more than just one game to right all of the team’s 3-point shooting woes. A 16-for-36 night from behind the arc is what head coach Wes Unseld Jr. has been waiting to see from this team. Perhaps, it offers a glimpse of what they are capable of.

That success was contagious. Porzingis went 4-for-8 from three, Jordan Goodwin was 3-for-3 and in total eight Wizards hit a long-ball against the Jazz.

But it’s another thing to sustain it. To do so, it’s evident Kispert is going to have to be the catalyst.

“You know he’s due, he’s a good shooter so he’s going to find his way eventually,” Unseld Jr. said. “So it’s good for him to see the ball go in, hopefully, that kind of gets him going and snowballs into what we saw last year.” 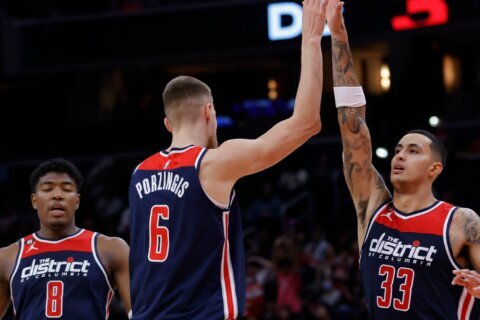 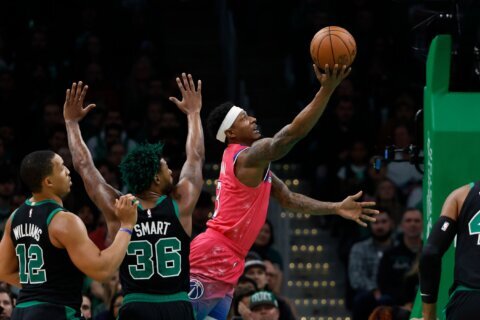